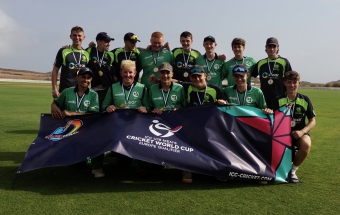 ALMERIA, Spain – For the second consecutive match, Lisburn’s Matthew Humphreys starred for Ireland Under-19s Men’s team as they defeated Scotland convincingly by 78 runs, booking their place in the ICC Men’s Under-19s World Cup in the West Indies next year.

Humphreys, who took 4-11 on Thursday in his side’s round robin win over the Scots, went one better today claiming 5-25 as Ireland’s bowling unit ran rampant for the second time in three days in back-to-back wins against their Celtic opponents.

While conditions were warm and muggy, Ireland’s captain Tim Tector won the toss and elected to bat first – and in an eerily similar outcome to Thursday’s match, the Irish batters largely struggled to get going. Nathan McGuire was the top-order exception, striking 43 off 50 balls, but by the 23rd over Ireland was 70-5 staring at another low total (at almost the equivalent stage in the last match, Ireland was 58-5).

Scott Macbeth (27) and Liam Doherty (21) forged a much-needed 41-run partnership for the 6th wicket – and late runs were added by Humphreys (11) and Jamie Forbes (12), but the Irish side succumbed to be all out for 144 from 46.4 overs – marginally better than their total of 139 all out last match.

Whilst appearing to be a low target for the Scots to achieve in isolation, in the context of the last match it was the Irish bowlers who went into the second innings full of confidence (Scotland was bowled out for just 44 on Thursday).

And just as he did on Thursday, Humphreys struck in the first over and set the tone for his side as the men in green steamrolled their way once more through the Scottish batting line-up.

Humphreys’ five-wicket haul stood out, however it was – in reality – a complete performance by the whole bowling unit. McGuire (2-14), Forbes (1-1), Muzamil Sherzad (1-2) and Liam Doherty (1-12) took the wickets alongside Humphreys, while Cameron Doak (0-8) went wicketless but bowled important overs to keep the pressure on the Scottish side.

In the end, the Scots scraped through to the 27th over, but finished on 66 all out – 78 runs adrift of the target, handing Ireland Under-19s qualification for the ICC Under-19s Men’s World Cup next year.

After the match, Matthew Humphreys said:

“The loss to the Netherlands early on in the tournament was hard to take, but in fairness they were the better side on the day. The lads were brilliant how they pulled together over the following days though – the team culture was really good, and we focussed on doing what we needed to do, that was getting three wins from three to qualify.”

“We were really ecstatic there when we took that last wicket – it’s not every day you qualify for a world cup. Probably the most pleasing aspect today was the fight we showed, to bounce back the way we did this week after that first loss was great.”

“Matthew Humphreys has been unbelievable all week for us – the first two games were pretty unlucky for him in that he didn’t get wickets against Jersey or the Netherlands, but the way he bowled against Scotland was a real reward to how he has been bowling all week. He stuck to his plan and was always threatening the batters. And with the bat as well, he was solid all week and helped a number of times getting us out of tricky situations, so it was great to see that fight and hunger from him.”

“I’m just really delighted for the whole squad – but the hard work really starts now, as it’s about three months until we head to the Caribbean for the world cup, so we will just put our heads down and train hard. And then, when we’re out there we’ll be sure to enjoy the experience – as I said earlier, it’s not every day you qualify for a world cup.”