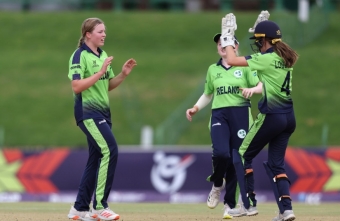 In what was a must-win game for Ireland, captain Siúin Woods elected to bat after winning the toss. In a nervy start Woods got trapped lbw with just her second ball faced, while Annabel Squires also departed in the third after she was deceived by an excellent delivery from Ketut Dewi – the ball moving off the seam and turning into the right-hander.

The introduction of Georgina Dempsey when Ireland were 18-2 was crucial to the win. She went on to post a 27-run partnership with Rebecca Gough before Gough’s innings was ended in dramatic fashion. After hitting successive boundaries in the previous over Gough went for another big hit but a stunning one-handed catch by Ni Kadek Ariani, while backing up to the boundary saw her head back to the pavilion.

Despite the loss of the three wickets in the powerplay, Dempsey and Craig settled the side down and went on to re-build the Irish innings. The batters took the field on, and along with some excellent running, where they turned numerous singles into twos, both went on to post excellent half-centuries as Ireland moved on to 125-5 with five overs remaining.

Dempsey, who hit her fifty off 38 balls, was caught by Ariana in the 17th over as her 93-run partnership with Craig was finally broken.

Ireland were never really threatened in the run chase once Kia McCartney made the initial breakthrough, with Gusti Ayu Made Ratna Ulansari chipping one to mid-on.

Player of the Match Dempsey took the wicket of Kadek Kurniartini in the following over - Joanna Loghran taking the catch behind the stumps.

Chaos ensued in the fifth over when Desi Wulandari was run out by a combination of Freya Sargent and Loughran as both batters ended up running in the same direction, as Indonesia found themselves struggling at 23-3 after the powerplay.

Indonesia captain Ni Luh Ketut Wesika Ratna Dewi did show plenty of determination in the middle, scoring an unbeaten 34*, their highest score at the world cup.