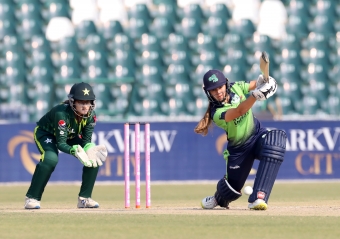 Amy Hunter will lead the squad

Instonians’ and Malahide’s Amy Hunter has been named the captain (in 2021, Hunter became the youngest player to score an international ODI century when she struck 121* for Ireland Women against Zimbabwe in Harare).

The coach and support staff that will travel to the tournament are:

The 16-team tournament will be held between 7 January and 24 January 2023 (it was originally scheduled for 2021, however the COVID-19 pandemic delayed the event twice).

The 16 teams are divided into groups of four as below:

The squad will depart on 1 January for a preparation camp at the University of Pretoria (during this week they will play unofficial warm-up fixtures against Zimbabwe and the UAE).

You can follow the progress of the tournament via: https://www.icc-cricket.com/womens-u19-world-cup/

“Firstly, I would like to extend a massive congratulations to all the players selected for the Irish squad at the first-ever Women’s U19 T20 World Cup. It is a great opportunity for all involved and a chance to create lifelong memories. I still fondly remember my experience at an Under-19s World Cup many years ago. I am very proud to be leading this team of very dedicated, talented and hardworking players.

“Tournaments like these give the players a real taste of what it could be like to be a professional cricket player. Equally, it’ll provide an insight into the intensity, game-pressure and exhilaration of what the players could expect to meet in the main ICC Women’s T20 World Cup down the line.

“The squad travelled to Spain at the end of October for practice games and spent some quality time fine-tuning their skills. The group is made up of some very exciting all-rounders who offer quality with both bat and ball. There is also very promising spin and seam options. We also have the experience of Amy Hunter and Georgina Dempsey who both have full international caps to balance the inexperience of the younger players. Ten out of the 15-player squad will be available for the following World Cup cycle which is very exciting place to be as a squad.”

“It is an exciting time in any athlete’s life to represent your country on the world stage. The introduction of the Women’s U19 World Cup is a further step in the right direction in creating opportunities for female athletes.

“Our own programme has continued to evolve in the last number of years with regards to female participation and domestic competitions. The introduction of contracts and the senior performance squad’s upward curve under the guidance of Ed Joyce will only act as an inspiration to these young players.

“The players will hopefully have an incredible experience as they compete against their peers from around the world. I wish them well and know this talented group will do us proud.“