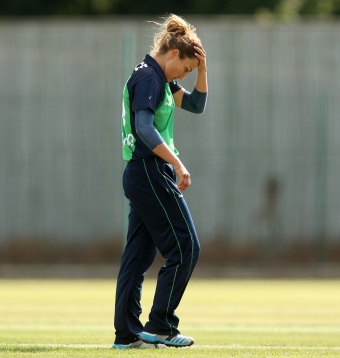 On a wet day in Dublin the sun arrived just in time to allow Ireland and Australia to get in the first T20 International at Sandymount in Dublin, although there was a 30 minute delay to proceedings.

Winning the toss Isobel Joyce, returning from injury, decided to bowl first, putting early pressure on Australia when Ciara Metcalfe picked up the wicket of Jonassen for five.  From then on though, Australia recovered well, and without any overly aggressive play Elyse Villani and Meg Lanning moved the score along at six an over for the first ten overs.

Lanning was joined by Ellyse Perry when Villani fell for 32 and the pair seemed to have set Australia up for a late onslaught setting the platform nicely with the score passing 100 before 15 overs had been bowled and with just two wickets down it seemed like a big score was on the cards.

Ireland then launched a fightback with the wickets of Lanning (43), Perry (17) and Harris (0) all falling for just one run as Kim Garth (0-19) completed a spectacular run out sandwiched between two wickets for Elena Tice (2-35).

That slowed the rate somewhat, and some tight bowling at the death from Lucy O’Reilly (1-29) meant Australia were unable to progress as they would have hoped, with Alex Blackwell (20*) and Jess Cameron (16*) getting Australia to 140-5 from their 20 overs.

The Irish chase did not get off to the best of starts with Clare Shillington (3) and Isobel Joyce (4) were both dismissed early to put extra pressure on the batting side from the very start.

Cecelia Joyce and Laura Delany looked to be building a strong partnership as Ireland recovered, but a flurry of wickets saw Delany (9), Joyce (26), Waldron (0) and Kavanagh (2) all falling quickly to give Australia the upper hand.

Kim Garth and Gaby Lewis worked extremely well to recover and give Ireland hope going into the last five overs, but Garth, who had produced an outstanding run out during the first innings, was run out herself backing up at the non-strikers end for 15 just as the pair started to accelerate.

Lewis and O’Reilly did what they could to push towards the total, and required 47 from the final three overs, but with Rene Farrell and Ellyse Perry bowling for Australia it was not to be.  Lewis was run out for 22 in the final over from a direct hit, with Lucy O’Reilly (13) and Elena Tice (1) finishing not out as the end with Ireland 115 - 8 still 26 runs short of their target.

The teams will meet again on Friday, with the start scheduled for 4.30pm at YMCA CC in Dublin.  Entry will be free for all spectators and the game will once again be streamed live on www.cricketireland.ie.