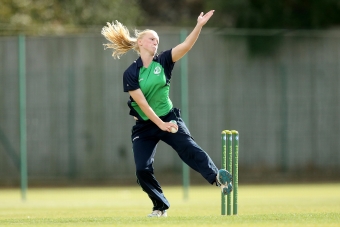 Ireland lost out in the second of three T20 Internationals against World Champions Australia on a hot and sunny evening in Dublin.

Bowling first after Australia won the toss and decided to bat first, Ireland were quickly onto the front foot thanks to three wickets from Kim Garth, but a late recovery with the bat and an extremely disciplined bowling display from Australia saw the visiting side win by 55 runs.

Garth ripped through the Australian top order, dismissing Elyse Villani (14), Jess Jonassen (1) and Alyssa Healy (5) and with the help of a wicket from Laura Delany (1-22), the Australians were reeling at 38-4.

Ellyse Perry led the fightback for Australia with 39 from just 32 balls with Meg Lanning (12), Jess Cameron (20) and Alex Blackwell (20) contributed to a growing total before an onslaught from Grace Harris, who scored 19 from just 7 balls in the final couple of overs, boosting the Australian score to 131-6.

Clare Shillington fell to Rene Farrell for just four before Cecelia Joyce was run out without scoring, putting immediate pressure on the Ireland reply.

Laura Delany (12) and Isobel Joyce (24) recovered well and things seemed to be back on track until a flurry of wickets saw Ireland lose four wickets for just ten runs, effectively ending any hopes of a victory for Ireland as the Australian bowling and fielding limited all the options for Ireland.

Kim Garth (15 not out) and Lucy O’Reilly (10 not out) closed out the innings but Ireland ended the innings 76-7, losing by 55 runs to a full strength Australian team.