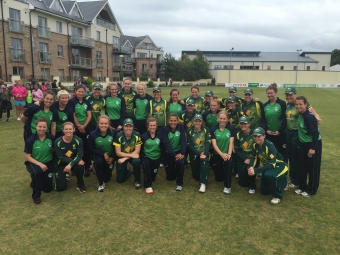 Australia showed their strength today with a 99 run victory over Ireland thanks to superb half centuries from Elyse Villani and Ellyse Perry helped them post a daunting 186-1 before restricting Ireland to 87-7 in the third and final T20 International between the sides.

Winning the toss once again, Australian captain Meg Lanning chose to bat first, changing up the order with Ellyse Perry promoted up the order and opening the batting with Elyse Villani in place of Jess Jonassen.

Perry played the supporting role throughout the innings carrying her bat to finish with 55 not out, a modest score for such a long period in bat during a T20, but it was her team-mates Villani and Grace Harris who did the damage.

The patience and willingness to hand over the strike from Perry allowed Villani to attack from the off and she reached her half century from just 30 balls.  Other than a slight chance of a run-out early in the innings there was no sign that either batter was going to lose their wicket.

Villani moved to 80 from just 52 balls before she was dismissed in a bizarre moment as she gave herself room to hit Elena Tice, only to hit the ball into the ground before hitting it again with the back of her bat in her follow through, the ball going on to hit the stumps and dislodge a bail.

Ireland barely had time to celebrate the wicket as Harris strutted to the wicket, making her intentions clear from the start as moved around in the crease and distracted the bowlers as much as possible as she smashed her way to 39 not out from 21 balls, including two sixes.

Australia looked for a long time like passing 200, but were unable to make it that far as they finished their 20 overs on 186-1.

Heading out in pursuit of such a large target Ireland knew they would need a bit of luck and some solid partnerships to get close to what was easily the biggest score of the series so far.  Unfortunately Clare Shillington was out in the first over after a thick edge carried to short third man, before, unbelievably, Isobel Joyce was run out at the non-strikers end after a deflection for the second day in a row.

That left Ireland 4-2 at the end of the first over, and when Laura Delany was also run out two overs later it seemed Ireland were facing an uphill struggle to get anything from the game.

By the time the powerplay two more wickets had fell, with Laura Delany run out for seven and Gaby Lewis stumped for 10 piling the pressure on the remaining batters with the score 28-4.

Cecelia Joyce was trapped on the crease by Jess Jonassen in her first over of spin to further compound Irish worries, but Mary Waldron and Kim Garth combined to start building a partnership.

When Waldron was bowled for nine, also by Jonassen (2-7), Ireland needed 20 an over and were all but out of the game.

Garth was joined at the crease by Lucy O’Reilly and the pair, who have impressed all week, added 37 runs for the seventh wicket before O’Reilly was run out for 14 in the final over.  Garth, who has arguably been Ireland’s player of the tournament, finished the match on 30 not out as Ireland fell 99 runs short handing Australia a third win.

Grace Harris won player of the series tournament after her impactful batting and tight bowling for Australia helped them through the series.  All three matches in the series were streamed live to audiences around the world, with over 3,000 people seeing the games, raising the profile of women’s cricket in Ireland.

Action from the second T20I