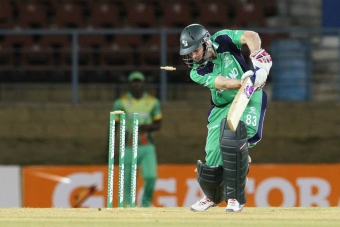 Ireland struggled in their first match in the West Indies © WICB

Ireland lost their first match in the Nagico Super 50 this evening as they fell 114 runs short of Guyana’s challenging total of 301 at the Queen’s Park Oval in Port of Spain, Trinidad.

Led by half centuries from their top three batsmen, Guyana amassed 301/3 from their 50 overs. Ramnaresh Sarwan gave the innings a fitting end after openers Trevon Griffith and Shivnarine Chanderpaul put on 129 runs for the first wicket.

Sarwan blasted an unbeaten 89 from just 62 balls, hitting ten fours and four sixes during his 87-minute stay at the crease. The right-hander formed two crucial partnerships at the end of the innings to propel Guyana’s scoring.

First, Sarwan and Christopher Barnwell came together in a 65-run partnership from just 39 balls. Barnwell made 31 runs from 15 balls, hitting two fours and three sixes. The real explosion though came at the very end when Leon Johnson met Sarwan at the crease.

Both batsmen put on an unbroken 76-run stand from the last 35 balls of the innings. Johnson ended on 27 not out. Earlier, Griffith and Chanderpaul gave Guyana a solid start, getting the innings off to a flyer without losing a wicket.

Both batsmen hit half-centuries. Griffith made 62 runs from 96 balls. When he went, Chanderpaul continued on strongly. Upon being given a life in the 38th over, he wouldn’t make use of it, falling off the last ball of the over for 79.

Kevin O’Brien was Ireland’s best bowler, taking all three wickets to fall. The task for Ireland mid-way through the innings was tough though. Guyana finished on 301/3 from their 50 overs.

In response, Ireland struggled to get out of the blocks. Opening fast-bowler, Paul Wintz rocked the Irish. Within just five balls, Niall O’Brien was trapped Leg Before Wicket. Ronsford Beaton then sent William Porterfield back in the same fashion.

Things only got worst for the Irish. They were left reeling at 27/4. Kevin O’Brien and Andrew Poynter came together to stem the flow of wickets. Both batsmen put on 59 runs from 61 balls. When Kevin O’Brien went for 39, Poynter continued to battle away.

He played a gutsy innings and put on two more brief partnerships while he stayed at the crease. John Mooney and Max Sorensen stayed with Poynter but they eventually went. Poynter got to a deserved half-century, but he didn’t last much longer. Soon after, he was run out trying to steal a quick single to Barnwell at short cover.

He was Ireland’s last hope. The Irish crashed to 114-run defeat, giving Guyana a bonus point along with their four for victory. They made 187 all out from 38.3 overs. Wintz finished with 3-30.

All over, Max goes caught for 29 and Guyana run out comprehensive 114 run winners,Congratulations to them Windwards on Monday next up for us