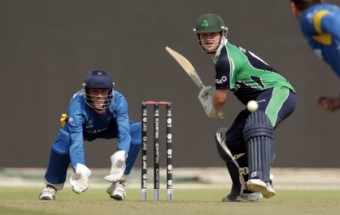 Paul Stirling’s Man of the Match performance ensured Ireland got their defence of their T20 crown off to the perfect start as they beat Namibia by 34 runs in Abu Dhabi.

Ireland’s title defense at the ICC World Twenty 20 Qualifiers has begun in the best possible way with a comfortable win over Namibia in Abu Dhabi this morning. Defending 166, Ireland’s captain William Porterfield shuffled his bowlers around cleverly, using seven in all to ensure that Namibia could never keep up with the required run rate of around 8 an over.

Having been inserted by Namibia, Stirling and William Porterfield both benefitted from dropped catches by the Africans to set the Irish innings up with an opening stand of 84 in just 53 balls. The Irish top five all contributed with Kevin and Niall O’Brien making 28 and 26 respectively, while Gary Wilson (20*) provided some late impetus, striking consecutive boundaries in the final over to help Ireland to an above par 166 for 5 at the halfway stage of the game.

The Irish attack then strangled the life out of the Namibian chase - not conceding a boundary for 50 deliveries between the 3rd and 12th overs - which saw the required run rate rise into double digits.

Raymond van Schoor - Player of the Tournament in 2012 - top scored for Namibia with an unbeaten 48, but Ireland were always very much in charge, despite a number of uncharacteristic mistakes in the field.

Alex Cusack looked to be enjoying being fit and healthy being back in an Ireland shirt finishing four overs with an impressive 2 for 22, Tim Murtagh also bowled a super spell up front for Ireland finishing with 1 for 19 whilst there were also wickets for Sorensen and Kevin O’Brien as Ireland closed out the game to win by 34 runs as Namibia ended on 134 for 7.

Ireland are back in action again tomorrow (SAT) when they play Canada, with the action getting under way at 10am Irish time.

To view the full scorecard of the match please click here.

listen to ‘William Porterfield after win v Namibia’ on Audioboo

listen to ‘Paul Stirling after win v Namibia’ on Audioboo

listen to ‘Phil Simmons after win v Namibia’ on Audioboo