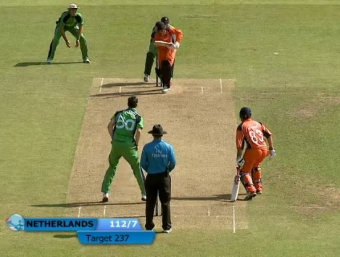 Tim Murtagh struck early for Ireland removing Eric Szwarczynski in the third over to Ireland just the start they needed. Paul Stirling was introduced after the initial Powerplay overs ended and he got the much needed second breakthrough as the Netherlands were looking comfortable at 60 for 1.

Kevin O’Brien picked up a wicket in his first over and began an inspired spell of seam bowling changing his pace nicely including taking a nice caught and bowled catch and his spell of wickets has put Ireland right on top as the Netherlands are 111 for 7. George Dockrell, John Mooney and Alex Cusack picked up a wicket each then to seal Ireland’s crucial two points and extend their lead at the top of the ICC World Cricket League Championship table.

The win leaves Ireland just two points away from sealing their place at the 2015 ICC Cricket World Cup, a win which they could get in the second match on Tuesday.

To watch the live video stream from www.icc-cricket.com/ click here

Ireland captain William Porterfield won the toss and chose to Bat first at a sun-drenched VRA Ground in Amstelveen. 37 Year Old Edgar Schiferli took the new ball for the Netherlands in his first One Day International since 2009 and claimed the wickets of both Paul Stirling for 1 and Ed Joyce who made a quick 22 off 19 balls.

Niall O’Brien made a composed 70 before being dramatically run-out from a direct hit after a dropped catch by dutch captain Peter Borren, Gary Wilson fell immediately after and it was left to William Porterfield who was joined by Kevin O’Brien to guide the Ireland total.

Kevin O’Brien got going very quickly and made 32 off just 22 balls including the only 6 of the innings but when he fell it started a collapse as Ireland’s remaining batsmen couldn’t accelerate the scoring. The final 6 wickets fell for 32 runs in less than 6 overs and Ireland will have to defend 236 to get the crucial 2 World Cup Qualifier Points. To watch the live video stream from www.icc-cricket.com/ click here.