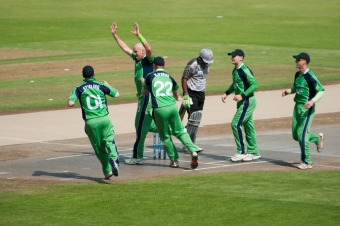 Ireland were superb in the field in Sharjah and a gem of an innings from Gary Wilson with a little help from Kevin O’Brien and John Mooney steered Ireland home to send them 4 points clear at the top of the ICC World Cricket League Championship Table.

Thanks to a very composed 72* from Gary Wilson and 23* from Ice-man John Mooney who joined him in a 6th wicket partnership of 62 Ireland have moved one step closer to the 2015 ICC Cricket World Cup.

They didn’t have it all their own way as despite a flying start from the opening partnership of Paul Stirling and William Porterfield, Ireland lost 4 quick wickets in just over 10 overs to set the nerves jangling across Ireland - Wilson though was joined at first by Kevin O’Brien and then by John Mooney to see Ireland home by 5 wickets with 8 overs to spare. Earlier in the day, a superb group effort in the field has restricted the UAE to just 165, leaving Ireland 50 overs to get the 166 runs they needed.

Pace off the ball did a lot of the damage for Ireland with Paul Stirling (3 for 32) and George Dockrell’s (2 for 15 off 8 overs) spin particularly effective. Both spinners took wickets in their first over with Dockrell striking twice in the seventh over of the match and Stirling bowling the UAE captain Khan in the 9th over to reduce the UAE to 39 for 4. A 69 run partnership between Patil and Anwar brought the UAE back into the game but a fantastic spell of bowling from Alex Cusack swung the game Ireland’s way, his clever variations in pace and angle giving him the miserly figures of 10 overs 3 maidens 3 wickets for just 21 runs and leaving Ireland feeling very happy with their effort.

Another win for Ireland on Wednesday in Sharjah would put them 6 points clear and very confident of a place at the 2015 ICC Cricket World Cup in Australia.