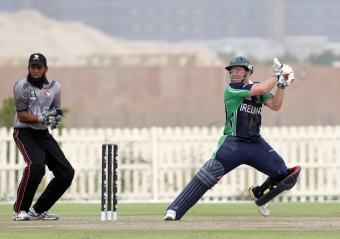 Ireland may have already secured their place in the ICC World Twenty 20 finals in Bangladesh with a thumping 85 run win against Hong Kong but William Porterfield’s team won’t be content with that.

There is still a semi-final and final to contest in the qualifying tournament and the Boys in Green will have their eyes on the trophy that they won in 2012. Ireland won the tournament back in March 2012 so they will be looking to retain it ahead of the Inter-Contintental Cup final in a few weeks and Bangladesh in March. Given the confidence around the squad at the moment, eyes will be set on an historic treble of trophies in 2013; With the ICC World Cricket League Championship already safely in the trophy cabinet.

Simmons’ charges take on the UAE in the second semi-final in the Zayed Stadium at 2pm tomorrow afternoon and with the match being shown live on Sky Sports 3, the Blarney Army can cheer Ireland on from their living rooms.

Ireland can expect a difficult game against the hosts - in their game during the group stages Trent Johnston came to the rescue when he bowled an outstanding final over to claim victory for Ireland. Porterfield will hope his team can extend their unbeaten run in the competition to 8 tomorrow afternoon to claim a spot in the tournament’s final. Trent Johnston rescued Ireland against the hosts in their group match.

The team has been very settled with the same XI taking the field for 5 of the 6 matches, James Shannon came in for Niall O’Brien in the final group match so that will be the one selection that will be decided on the day. It has been an all-round effort so far in the UAE but the opening pair of Paul Stirling and William Porterfield have been in particularly good form and the pair are dominating the side’s MVP rankings so far in the tournament.