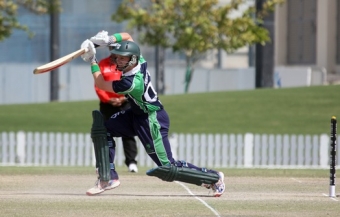 A record breaking unbeaten 127 from Irish skipper William Porterfield inspired his side to a crushing 75 run win against USA in the sweltering desert heat of Abu Dhabi.

The win see Ireland top of the group, ahead of Hong Kong on run rate, and after a couple of narrow escapes at the weekend, this was much more like it from Phil Simmons’ charges.

The Americans’ skipper Neill McGarrell won the toss and invited William Porterfield to bat first but he was soon rueing his decision as the Irish openers totally dominated the early exchanges. Porterfield and Paul Stirling fairly raced along to a 94-run opening stand, the skipper in outstanding form before Stirling was bowled by Karan Ganesh for 25.

Kevin O’Brien then joined the fray and that pair added 44 before the Railway Union man fell for 18, followed soon after by Trent Johnston (7). You sensed that the damage had been done by that point however as a well set Porterfield was joined by John Mooney with 151 runs in the bank and 27 deliveries still to come.

Try though they did the USA were unable to make further inroads as the Ireland captain stamped his authority over the innings and the game. Mooney found his form too as he made an unbeaten 32 off just 13 balls (2 fours, 2 sixes) but this was all about Porterfield.

The Warwickshire opener eventually finished 127 not out- an innings lasting 69 balls and containing 12 fours and 5 sixes. This was his the first T20 international hundred by an Irish player, and it was the 29 years old highest individual score in limited overs cricket for either club or country. The boundaries count were also Irish records.

Ireland finished on their highest total in the shortest format - 216 for 3, eclipsing their previous best of 202 against the ame opponents at the same venue in 2010.

Ahmed (2-30) and Ganesh (1 for 26 off 4 overs) fared best in the melee as the USA struggled to contain the in-form batsmen, who never took their foot off the gas. To be fair, Akeem Dodson (27), Timroy Allen (20) and Steven Taylor (17) combined to give the reply a solid start as the Americans reached 57 for 1 in the 6th over.

At that point Ireland brought Paul Stirling and George Dockrell into the attack however and the slow stuff did the trick. Stirling, impressive with the ball against UAE was again the pick as he claimed 3-25 while Dockrell chipped in with a solid 2-19.

Skipper McGarrell resisted with 23 late on for his side but it was all damage limitation by then. Mooney (2-18) and Max Sorensen (2-24) tidied things up at the end as USA finally closed on 141 all out.

Ireland are back in action tomorrow when they face fellow Europeans Italy at the Oval 1 ground - action gets under way at 6am (UK/Ireland).

Next up tomorrow for Ireland is Italy in Abu Dhabi again at 6am Irish time.

listen to ‘William Porterfield after Century v USA’ on Audioboo

listen to ‘John Mooney after USA win’ on Audioboo

The Full Scorecard can be found here. Man of the Match Centurion William Porterfield with Match Referee Dev Govindjee: Thanks to Barry Chambers for Photo