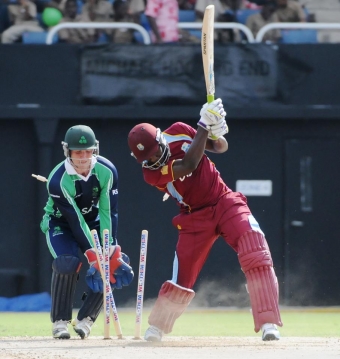 There was a sense of history repeating itself this evening at Sabina Park in Jamaica, as Ireland returned to the scene of their most famous victory of all, the St. Patrick’s Day victory against Pakistan at the 2007 World Cup to score another famous win in the Caribbean.

The six wicket success over the reigning ICC World Twenty20 Champions, the West Indies, on their own turf was built around a superb effort from Ireland in the field and an ice-cool innings of 40 not out from the veteran Irish left-hander Ed Joyce.

The West Indian Captain Darren Sammy had won the toss and had no hesitation in choosing to bat first and unleash his powerful batting line-up against Ireland’s bowling attack. It did look at first like it would be a big total that Ireland would be faced with, as the powerful Dwayne Smith and Chris Gayle got the hosts off to a good start. A pair of huge sixes from Smith got the West Indian innings in motion and after two overs of Paul Stirling’s off-spin at the start of the innings it was Tim Murtagh who came on to make the breakthrough as he had Smith caught in the deep by Sorensen.

Irish captain, William Porterfield rotated his bowlers nicely and it was Clontarf’s Alex Cusack who claimed the key wicket of the big hitter Chris Gayle for 18. The two early wickets stemmed the run-rate and as Ireland looked to contain the West Indian batsmen, the locals’ frustration was audible, the West Indies crawled to 58 for 2 at the half-way stage of their innings.

A crucial point of the match came with the introduction of George Dockrell’s left-arm spin as Marlon Samuels ran out of patience, the Man of the Match in the World Twenty20 Final in 2012 that helped see the West Indies be crowned World Champions, came down the wicket and was stumped by Gary Wilson. Dockrell wheeled through his 4 overs consecutively then to claim the superb figures of 1 for 15 and Ireland sensed an opportunity.

With the run-rate not increasing for the hosts, a flurry of late wickets fell, with Kevin O’Brien taking two wickets in an over to finish with 2 for 15 whilst Tim Murtagh removed the dangerous Andre Russell with a beautiful yorker to finish with 2 for 28. They were well supported by Alex Cusack who bowled particularly well at the death for Ireland as he bowled his 4 overs for just 17 runs and claimed the wicket of Lendl Simmons to go alongside that of Chris Gayle; and also by Max Sorensen who was the other wicket taker for Ireland with 1 for 23 from his 4 overs.

Ireland restricted the West Indies to 116 for 8 from their 20 overs and they needed less than 6 runs an over to topple the hosts. Ireland’s chase began in the most inauspicious of circumstances as they lost both openers within the first two overs, captain William Porterfield was adjudged LBW to Samuel Badree for 4 in the first over before Paul Stirling smashed a ball right to the deep wicket fence only to be caught by Andre Russell off the bowling of Ravi Rampaul for a duck.

The Boys in Green couldn’t have looked for two calmer heads at the crease than the experienced pairing of Ed Joyce and Gary Wilson. The Surrey ‘keeper-batsman Wilson looked particularly fluent for his 18 until he was tempted into going for the big hit off Badree and was bowled. That brought Clontarf’s Andrew Poynter to the crease and although he was watchful at first, he combined well with Joyce in a 58 run partnership that brought victory within sight for Ireland. Poynter was particularly strong against the West Indian captain Darren Sammy as he smashed him out of the attack with 10 runs off 4 balls in the 13th over. Crucially the required run-rate never got out of hand for the Irish batsmen and was kept in and around a run a ball; Joyce knew that with wickets in hand this was very achievable.

After the fall of Poynter for 32 from 30 balls, Joyce was joined by Kevin O’Brien with just 22 needed to win and plenty of time to do so. There were a few nerves at first from O’Brien but a pair of boundaries from him at just the right times played the perfect foil to a majestic innings from Ed Joyce.

And so it was left to Kevin O’Brien, one of only two survivors from the team that beat Pakistan back on St. Patrick’s Day in 2007 to hit the winning runs for Ireland but tellingly unlike 7 years ago there were no wild celebrations from the Irish but more a determined delight with a view to the further challenges ahead.

An opportunity for a first-ever series win over a Full Member Nation awaits Ireland on Friday evening at the same venue, before a one-off ODI also at Sabina Park on Sunday. In the back of Phil Simmons mind though, will be the focus on the ICC World Twenty20 next month in Bangladesh, which ironically for the Irish starts on St. Patrick’s Day again, with a must win game against Zimbabwe.

Great win today against the World champions. Real men of the match were the bowlers esp @tjmurtagh and @georgedockrell #COYBIG

The day belonged to Joyce however and the Sussex Captain was fittingly named Man of the Match for his classy 40 not out made in the most elegant of manners off 49 balls with just two fours. He controlled and paced his innings and the Irish chase perfectly, and on the occasion of his 99th cap for his country the 35 year-old Bray native may have just played one of his most memorable innings of his Irish career. Seven years on from that famous St. Patrick’s Day in Sabina Park, the Irish will celebrate in the Jamaican Capital again.