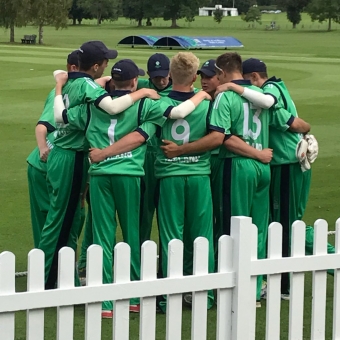 The Ireland Under 15 Team Preparing to Take The Field

The Ireland Under 15 squad round off a busy tour with a glamour tie against the West Indies Under 15s at Merchant Taylor’s School in Hertfordshire on Thursday August 17th.

The Ireland team competed in the Celtic Cup with Scotland last week before travelling south for the second leg of their tour.

On Monday August 14th, a Nathan McGuire half-century set the under 15s on their way to an emphatic 96 run victory over Surrey. Today, the 16th, they are playing two T20 contests against Hertfordshire.

This all in preparation for a tilt at the young men from the Caribbean. Not only is this a high profile match for the ‘Boys in Green’ to take part in, it also comes just a month before the two senior sides clash at Stormont in a One-Day International.

This summer has been a successful one for Irish underage sides. The boys and girls under 15s and 17s have won various series’ and the boys Under 19s dramatically secured qualification for the ICC Under 19 World Cup in New Zealand.

Playing international cricket at Under 15 level is a remarkable opportunity and learning experience for these young cricketers.

There is a responsibility on coaches when leading underage teams to not only improve skills of the game but to develop the maturity and capability of young men and women for whatever lies ahead of them.

When Ireland host the West Indies at Stormont, Andy Balbirnie, George Dockrell, Barry McCarthy and Paul Stirling may all face them. These players all represented Ireland at Under 15 level.

They developed, matured and learnt the game on camps and tours through their teenage years. There will be plenty of their teammates who represented Ireland at Under 13, 17 or 19 level playing on September 13th as well.

August 17th 2017 may not mean anything to the wider Irish cricket public at the moment. However, how many of the Under 15 lads facing the West Indies tomorrow will continue through the pathways and represent Ireland at senior level against the West Indies in the future?