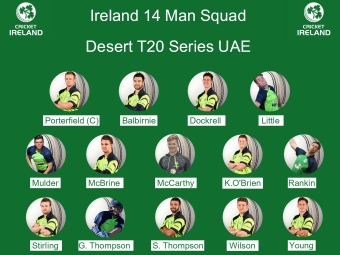 IRELAND have been boosted by the return of a trio of experienced internationals for next month’s Desert T20 in the UAE.

Boyd Rankin, Stuart Thompson and Andrew Balbirnie have been named in a squad of 14 for the eight-team event.

“It’s fantastic to have the three guys back in the squad after missing so much of 2016,” said Bracewell.

“Boyd’s height and pace give an extra dimension to our attack and it’ll be great for him to pass on his wealth of experience to Barry McCarthy, Craig Young and young Josh Little in particular, who just turned 17 last month.

“Andrew Balbirnie and Stuart Thompson have both been working hard in Australia turning in some excellent performances. Andrew showed his quality during the 2015 World Cup with half centuries against South Africa and Zimbabwe so it’ll be great to have him back at his best. Stuart has undoubted quality and we hope he’ll come back refreshed after his break from the international game.”

Jacob Mulder and Josh Little retain their places in the T20 squad following their debuts in the format against Hong Kong, and Greg Thompson’s impressive return in that game after an eight-year absence also sees him make the tour.

Gary Wilson is the only wicket-keeper named in the squad - Niall O’Brien, Stuart Poynter and Lorcan Tucker all miss out, while the experienced Tim Murtagh is also left out.

“We felt that one keeper would be enough with just four games scheduled so the selectors have gone with Gary for the event.

“The competition gives us a chance to look at options in the future so we’ve taken the opportunity to have another look at both Josh (Little) and Jacob (Mulder). The fact that Josh is a left-armer with impressive pace, and Jacob is a leg-spinner gives the attack some much needed variety.

“Greg Thompson was the stand-out batter in the Hong Kong game. He’s fearless, strikes the ball cleanly, and can score all-round the wicket which makes him a valuable asset in T20 cricket,” concluded Bracewell.

The fixtures and dates for the competition will be announced by hosts Emirates Cricket Board in due course.