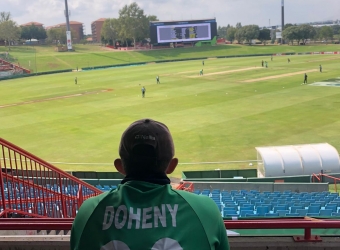 SuperSport Park, Gauteng - The Ireland Wolves have begun the competitive stage of their tour with a narrow loss followed by a convincing win over a Namibian side that boasts numerous players from the recent T20 World Cup Qualifiers.

After winning the toss, the Namibian captain Gerhard Erasmus asked the Wolves to bat first. A solid start to the innings saw the top five batters all register double-figure scores, with the best knock of the day bein delivered by Wolves skipper Harry Tector. Tector’s 75* from just 39 balls included five fours and five sixes, and saw the visitors finish strongly with 177-6 from 20 overs.

In response, the Namibian side lost three early wickets Tyrone Kane (2-22) claiming two scalps in the early skirmishes, while Craig Young (2-20) grabbed one.

The danger-man Erasmus (63 from 35 balls, including 5 sixes) then grabbed hold of the innings, and together with Nicol Loftie-Eaton (40 from 20 balls) put on 80 for the fourth wicket in 6 overs. Despite claiming a few late wickets, the Wolves could not prevent Namibia from claiming a 3-wicket win with two balls to spare.

The venues are looking into a livescoring solution for the remaining matches. When available, we will advise the links.#BackingGreen #GoWolves pic.twitter.com/fkdOGpBsly

This time Wolves captain Harry Tector won the toss and chose to bat first again. After losing Stuart Thompson (0) and Lorcan Tucker (9) early, a 95-run stand between Stephen Doheny (63*) and Gareth Delany (69) gave the Wolves a solid platform to build on. Doheny’s 51-ball innings saw him carry his bat, while Delany’s 36-ball stay included 9 fours and 2 sixes. Late wickets fell though, and the Wolves finished on 170-7 from 20 overs.

Looking for a quick response, the Namibian side threatened early but lost crucial wickets to stymie their run rate. Gerhard Erasmus once again looked to hold the innings together (43 from 25 balls), but the Wolves bowlers kept a better line and length in this match and restricted the Namibian run scoring.

Tyrone Kane’s 2-23 and Josh Little’s impressive 0-13 from 4 overs turned the screws on the middle-order batters, and the run rate required grew to almost two runs-a-ball, forcing riskier stroke play. That resulted in regular wickets falling to the Wolves, and eventually the Namibian side finished with 147-9 from their 20 overs.

Wolves Head Coach Pete Johnston was pleased with his sides two outings today, and confirmed after the match that squad member Curtis Campher was not used today as a precaution. Campher had felt hamstring tightness in training, and with plenty of cricket left on the tour it was decided he would be rested today.

The Wolves will train for the next two days, before meeting Namibia in a third T20 on Friday at Irene Villagers.