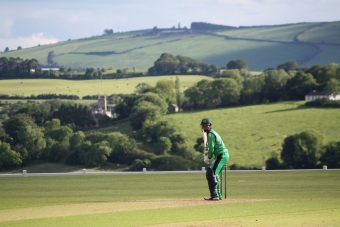 OAK HILL, Wicklow – A five-wicket haul by Craig Young and a belting half-century by Gareth Delany weren’t enough as the home side succumbed to a Scotland A side well-led by captain and centurion Dylan Budge at Oak Hill Cricket Club today.

After winning the toss, Ireland Wolves captain Harry Tector elected to bowl first. Ireland international Craig Young caused early damage, removing both Scottish openers, before the visiting captain Dylan Budge (132 from 136 balls) settled in to firstly stabilise the innings, then go on to dominate the Irish bowlers. 23-year old Budge, playing in only his second List A match, was dropped first ball – which turned out to be an expensive miss. He hit nine fours and four sixes in his captain’s knock that threatened at times to take the game away from the home side.

Budge received support from his middle-order, including an enterprising 28 from 26 balls by Scottish international Michael Leask, and was eventually out caught in the outfield chasing runs in the final overs.

Craig Young came back to clean up the tail, taking 5-36 from his 9 overs. Fionn Hand claimed two late wickets, finishing with 2-46, and Scotland were dismissed in the 48th over for 252.

The Wolves response started well, with James McCollum (33) and Jack Tector (26) putting on 58 for the first wicket. However, a loss of five wickets for just 33 runs saw the home side set back on their heels at 91-5.

From there the Wolves bottom order attempted a big-hitting rearguard action led first by Tyrone Kane (41) and then Gareth Delany (50), ably supported by an unbeaten knock of 20 by Graham Kennedy.

In the end, the loss of early wickets meant the lower order had too much to overcome and the Scots dismissed the Wolves for 227.

One note of concern for the Wolves was an injury in the field to Stephen Doheny. His condition will be assessed overnight.

After losing the first 50-over match of the series due to bad weather yesterday, the two sides agreed to reschedule the match tomorrow, starting at 11am at the same venue, with a third 50-over match scheduled for Friday.

Scotland A won by 25 runs