Ireland Wolves beaten by 4 wickets by Bangladesh A 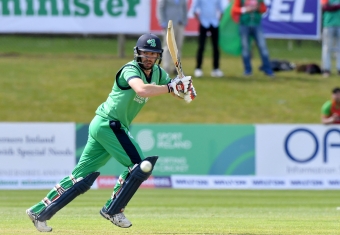 Two defeats in two days for the Ireland Wolves against Bangladesh A but in markedly contrasting styles in Cox’s Bazar.

In today’s T20 the Wolves lost the toss and were asked to bat first. Skipper Andrew Balbirnie (83) scored a second consecutive half-century as the Wolves posted 170/7. Bangladesh A chased down the total with just two balls and four wickets to spare.

Simi Singh took a wicket and went for just 24 runs off his four overs with Andy McBrine taking 1-30 off his four as the Wolves sought to defend their 170. Barry McCarthy took 2 wickets and there were wickets for Peter Chase and Stuart Thompson as well but Bangladesh A had Al-Amin scoring 67 off 40 balls and Hossain with 47 off 26 balls to take the game away from the Wolves.

Skipper Andy Balbirnie was happy to see the response of his team today. “It was another close game that unfortunately didn’t go our way. It was very satisfying to see the lads react so well after a poor performance yesterday,” he said.

Bangladesh A now lead the series 3-0 with just one 50-over match to play tomorrow (October 26th).

Balbirnie is looking for the Wolves to finish the tour strongly. “With one game left and lads looking to impress. It’s important we apply all our hard work and look to finish off a tour that has been testing but very important for us.”

The final one-dayer gets underway at 9am local time (4am Irish time) on Thursday.

Losing six wickets for just 54 runs, it fell to captain Andrew Balbirnie (52) and Shane Getkate (23) adding 48 for the 7th wicket to take the Wolves past 100. The last four wickets fell for just one run and the Wolves were bowled out for 103.

In chasing down their target Bangladesh A lost two wickets and skipper Nazmul Hossain hit an unbeaten 41 to see them home with 27 overs to spare.