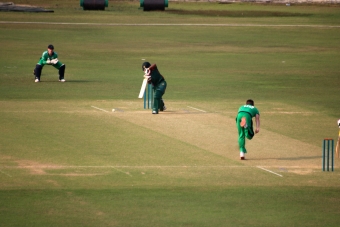 The Wolves have now lost the series, but have one game left to finish on a high

Mammadul and Hridoy stuck 88 not out and 80 not out respectively as the hosts chased down the required 183 runs with 8.3 overs to spare. Today’s result means that Bangladesh Emerging XI has clinched the series after taking an unassailable 3-0 lead with one match remaining.

Peter Chase was the pick of the Irish bowlers, returning figures of 2-29.

For the third match in a row, Ireland Wolves were asked to bat first and they lost opener Stephen Doheny in the fifth over to leave the scoreboard reading 14-1.

Having reached the end of the powerplay with the score on 40-1, the visitors likely felt that the foundations had been laid to push on and make an imposing total. However, Ireland Wolves lost Jeremy Lawlor (16) and Harry Tector (0) in successive balls during the 11th over to leave the tourists in a spot of bother.

Despite the early fall of wickets, Tector’s side rallied. Mark Adair (40) and Lorcan Tucker (24) added 46 runs for the fifth wicket as the score moved to 100.

However, 100-5 was soon 112-7. Ruhan Pretorius (35) and Graham Hume (29 not out) combined to share a 57-run eighth-wicket stand, before the former was caught by the substitute fielder off the bowling of Saif Hassan.

Hume and Ben White added a further four more before the tourists lost their final two wickets for nine runs and were dismissed for 182 with 3.4 overs unused. Sumon claimed the final Irish wicket to finish with 4-31 off 8.2 overs.

In reply, Bangladesh Emerging XI lost two early wickets as both Tanzid Hasan Tamim and Ali were dismissed for two in the fourth over of the chase.

Ireland Wolves were given hope after those two quick wickets, but Mammadul and Hridoy batted patiently and shared an unbeaten stand of 176 to see their side over the line.

The next match in the five-match series will take place in Dhaka on Sunday. You’ll be able to follow the action via a live stream on YouTube, regular updates on social media or through the Wolves hub on the Cricket Ireland website.