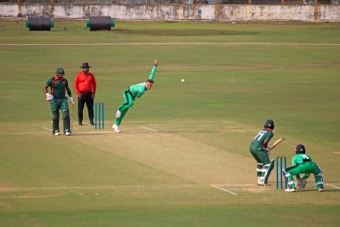 DHAKA, BANGLADESH – A century by Mahmudul Hasan Joy set up a five-run win for Bangladesh Emerging XI over Ireland Wolves in the final One-Day Match of the series.

Joy hit 123 off 135 balls, striking nine fours and three sixes along the way to help his side clinch a 4-0 series victory at the Shere Bangla National Stadium.

Joy and Towhid Hridoy (20) added 45 for the third wicket before the latter was caught by Peter Chase off the bowling of Tector. Bangladesh Emerging XI lost their next two wickets for 54 runs leaving them on 163-5 in the 33rd over.

Mahidul Islam Ankon (33) alongside Joy, combined to put on 71 for the sixth wicket; Bangladesh Emerging XI was 234-6 with 3.3 overs left in the innings. The hosts then lost their last four wickets for 12 runs in 11 balls and were eventually all out for 260 with two deliveries unused.

Adair was the stand-out Ireland Wolves bowler, claiming 3-27 in 5.4 overs.

In the chase, Ireland Wolves lost Jeremy Lawlor (0) early, but Stephen Doheny (81) and Adair (45) shared a 97-run stand for the second wicket.

Adair was then caught by Joy off the bowling of Saif and from 104-2, Ireland Wolves slipped to 135-4 and this induced a steady flow of wickets as they found themselves on 195-6, requiring a further 66 off the last 10 overs.

Wickets kept falling and the required run continued to rise. Despite a rally in the final five overs, Ireland Wolves fell just short with Chase (10 not out) and Ben White (6 not out) left unbeaten at the end.

In a change to the tour itinerary, there will now only be one T20 match instead of two. This match will take place in Dhaka on Tuesday and you’ll be able to follow the action via a live stream on YouTube, regular updates on social media or through the Wolves hub on the Cricket Ireland website.