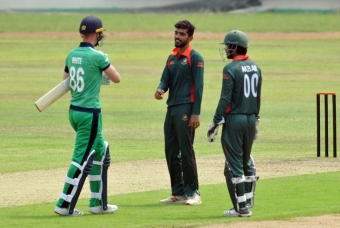 The Wolves tour has now concluded

After winning the toss and electing to bowl, Ireland Wolves struggled in the heat as Bangladesh Emerging XI’s batsmen found their rhythm and punished the bowlers at every opportunity.

34-2 at the end of the powerplay became 78-3 at the halfway point in the innings. Ireland Wolves then went on to concede 106 runs in the remaining 10 overs.

Peter Chase was the stand-out Ireland Wolves bowler, taking 2-36 off his four overs. There was a wicket each for Mark Adair, Curtis Campher, Gareth Delany and Shane Getkate.

In pursuit of the victory, Delany (0) fell early as Harry Tector and his side struggled to get the ball away. Tector (22) and Stephen Doheny (29) shared a 45-run stand for the second wicket before the Wolves captain was bowled by Tanvir Islam.

Ireland Wolves then lost three wickets in as many overs and they found themselves 63-4 at the end of the ninth over and 70-4 at the halfway stage. Neil Rock and Lorcan Tucker (38) combined to add 30 before Shamim got rid of the former for 16.

Tucker fell a couple of overs later and the tail was exposed. Getkate provided one last push as Ireland Wolves looked to chase down the target and win their first match of the tour. However, he was left stranded on 26 not out as Chase was bowled by Sumon Khan (4-28) and Ireland Wolves were all out for 154 with 11 balls unused.