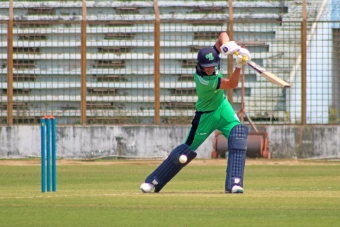 The Wolves set what looked like a challenging total of 261

CHATTOGRAM, BANGLADESH – A century by opener Saif Hassan helped Bangladesh Emerging XI to a six-wicket win over Ireland Wolves today, meaning the home side lead the series 2-0 with two matches to play.

Saif hit 120 off 125 balls in a knock that included 11 fours and five sixes as his side scored the required 261 runs for victory with 27 balls to spare at the Zahur Ahmed Chowdhury Stadium.

Earlier in the day, Lorcan Tucker struck 82 not out off just 52 balls – bludgeoning nine fours and two sixes whilst propelling his side to 260-7 in their 50 overs. There were starts for Curtis Campher (43), James McCollum (40) – who retired hurt – and captain Harry Tector (36).

For the second game in a row, Ireland Wolves were inserted by Saif Hassan on what looked like a rather grassy surface.

Ireland Wolves were watchful initially and didn’t take any risks, reaching the end of the first powerplay with the scoreboard reading 33-1 – Pretorius (7) was the only wicket lost, run out by a throw from mid-on.

New man Jeremy Lawlor and McCollum remained watchful before the latter appeared to injure his hamstring in the 16th over. Lawlor was out caught 10 overs later for 21.

At 95-2 shortly after the halfway mark, Ireland Wolves needed to increase the run rate. Campher and Tector did that well, adding 44 for the third wicket before Tector was stumped.

That wicket brought Tucker to the crease and he combined with Campher to add 60 for the fourth wicket before the South Africa-born allrounder was caught by Saif off the bowling of Sumon Khan.


With 50 balls left in the innings and six wickets in the bag, Ireland Wolves could afford to put their foot down - and that they did. A further 60 runs came off the remaining deliveries with Tucker acting as the chief aggressor.

During the run chase the visitors had periods of play during which they looked to turn the momentum, but in the end the Bangladeshi’s were too strong and ran out the win by six wickets.

The next match in the five-match series will take place in Dhaka on Friday. You’ll be able to follow the action via a live stream on YouTube, regular updates on social media or through the Wolves hub on the Cricket Ireland Website.