Ireland Wolves impress against Bangladesh at The Hills 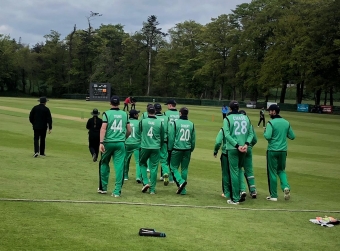 Ireland Wolves picked up an impressive win over Bangladesh

After winning the toss and electing to bat first, the Wolves set about building an impressive score based on solid early partnerships of 33, 46 and 124 for the first three wickets respectively.

James McCollum led the way with 102 from 109 balls, and Simi Singh hit 91 from 95 balls, as the Wolves took to the visiting bowlers on a chilly day in Dublin.

For the visitors, the response started positively with a 56-run opening stand between Tamim Iqbal (21) and Liton Das (26), but good Wolves bowling reined the run-chase in and began to take regular wickets. Only Bangladesh captain for the day, Shakib Al Hasan, looked dominant with 54 from 43 balls. The Bangladeshi batters were eventually dismissed for 219, handing the Wolves an 88-run victory.

For the Wolves, Singh impressively backed up his 91 with the bat to claim 4-51 with the ball, and Kane claimed 2-38 from nine overs.

“It was a very professional performance from start to finish. A big 100 and a big partnership is exactly what is required and James and Simi were outstanding.”

“If we are honest with such a good platform and so many wickets in hand we could have had 20 more runs on the total, but Tyrone Kane gained momentum back for us in the last 5 overs with a very smart cameo, well supported by Young and Rock.”

“I thought Harry managed his 5 bowlers very well and that the seamers delivered by taking responsibility by bowling an excellent challenging good length from start to finish, getting the ball to seam and always looking a threat. We had great energy in the field throughout on a bitterly cold day and Simi wrapped up a good day with his 4 wickets.”

“But overall this was a brilliant team performance and the lads can be proud of a great achievement beating a full strength Bangladesh.”

Ireland Wolves v Bangladesh, List A 50-over match, 5 May 2019, The Hills Cricket Club

The Ireland Wolves finished on 307-8 from their 50 overs against Bangladesh.