Ireland Wolves return to red-ball cricket. How do they shape up? 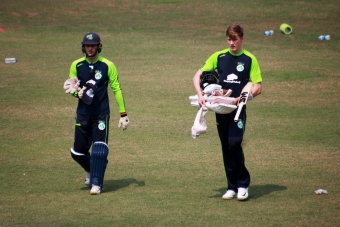 Ireland Wolves get their tour of Bangladesh underway tomorrow with a four-day encounter against Bangladesh ‘A’ at the Zohur Ahmed Chowdhury Stadium in Chattogram. This is their first red-ball encounter since Sri Lanka in 2019 - so what can we expect?

Ireland international and Northern Knights’ top order batter Harry Tector will once more lead the Wolves side out, as he has since 2019. He said recently in an interview that he is looking for a better results than the Wolves’ tour to Sri Lanka in 2019 where they went winless, despite some great individual performances throughout that multi-format series.

The match starting tomorrow will also be the Wolves’ first four-day match since that series against Sri Lanka, and a test for this young side in Asian conditions against tough opposition.

Overseeing the squad for the entire four-week tour is Ireland Men’s head coach Graham Ford, with Assistant Coach and National Bowling Lead Stuart Barnes alongside. The pair have a wealth of experience to call upon to help emerging talent grow in sub-continental conditions - Ford the former Head Coach of Sri Lanka, and Barnes coached the Bangladesh A side (as recently discussed in this interview).

Nine members of the Ireland Men’s senior squad that toured the UAE in January are available, including paceman Mark Adair and opening batsman James McCollum. Uncapped players at international level such as Ben White and Stephen Doheny will be keen to learn from the senior players in the group. Speaking ahead of the tour, Tector was positive about the experience, but wary of the opposition:

“With the amount of cricket that the senior team play in Asia, having tours like this with the Wolves for guys who are hopefully going to be playing for Ireland for years to come is massively important to gain experience in a part of the world which is alien for many of us.”

“I expect them (Bangladesh ‘A’) to be very good – I’d say they’ll have a few players from their Under-19 World Cup-winning side. From playing Bangladesh sides in the past, we can expect good spinners, lovely batsmen and decent bowlers. It’s nothing that we can’t handle and I know the lads are looking forward to getting started out there.”

Despite being two years ago now, Tector knows he can take positivity out of the last four-day match against Sri Lanka A where the Wolves posted a 500+ first innings total and forced the home side to follow-on. While the game ended in a draw, the lessons learned should still resonate with eight of the team that day having a good chance of walking out on the field tomorrow.

Among the newer faces in the Wolves set-up in 2021 are the South African-born trio of all-rounders - Curtis Campher, Graham Hume and Ruhan Pretorius.

Campher burst onto the Irish scene last year - first with the Wolves against Namibia, and then against England with the senior side - but he has not played at this level in these conditions previously, so will undoubtedly benefit from any opportunity to play. Hume and Pretorius have both played first-class cricket in South Africa and both have made their mark at provincial and club level in Ireland (and both qualify to play for Ireland in 2022), but will be looking to take their opportunities to impress a wider audience in their first Wolves’ outings, if chosen to play.

Pretorius has represented KwaZulu-Natal Inland in South Africa and Northern Knights in the Inter-Provincial Series. The 29-year-old has scored 2,610 first-class runs at an average of 29.32 with 14 fifties against his name. In addition to his runs, Pretorius has taken 157 wickets at an average of 23.66, with best match figures of 12-76

Hume, meanwhile, has represented a number of teams in South Africa as well as the North West Warriors in Ireland; he has taken 308 wickets in 97 first-class matches with best match figures of 9-44.

The 30-year-old has played in Asia before. He said:

“I was lucky enough to tour Bangladesh in 2011, so I have a fair idea of what to expect. I remember the wickets being quite slow and good for batting. And it was also pretty hot and very humid.

“With regards to my game, I have an idea in my head about how I will want to go about it in those conditions. You always go into games with a plan, but in the end every cricket pitch is slightly different, so it’s about being able to adapt and workout the best way to go about things on the day.”

With nine of the tourists having senior first-team experience, and three further players being on the Wolves tour of Sri Lanka in 2019, the Irish side will put out a competitive side, no matter who appears in the playing XI. The challenge will primarily come down to whether the cobwebs need a few days dusting after a long off-season for those who did not play in the UAE with the senior side last month.

Conditions will be warm, with temperatures of 29 degrees with largely sunny conditions.

While the hosts are yet to confirm whether a livestream will be in place for the match, fans will be able to follow livescoring and highlights via the Cricket Ireland match centre. The match is scheduled to start at 3.30am (GMT).