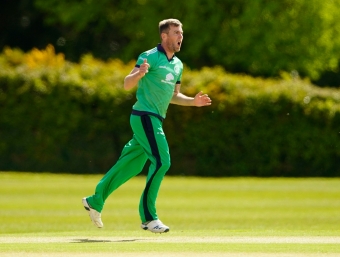 OAK HILL, Wicklow – Ireland Wolves revenged yesterday’s defeat with a smash-and-grab win in the deciding third match of the series against Netherlands A at Oak Hill Cricket Ground in Wicklow today.

With the three-match series locked 1-1, Netherlands A captain Scott Edwards won the toss and opted to bat beneath bright blue summer skies.

The Wolves players entered the field of play with a noticeably upbeat demeanour, desperate to make amends from yesterday’s heavy defeat. After a sprightly start from the Dutch openers with a run-a-ball 29-run partnership, Graeme McCarter broke through first inducing an edge from Musa Nadeem (13) to William Porterfield at first slip. That wicket opened the proverbial floodgates as the visitors lost the remaining nine wickets for just 76 runs.

Player of the Match McCarter – who earned 7 Irish senior caps between 2011 and 2015 - continued his good form with the ball this week, bowling a consistent line just outside off-stump with a bit of shape making life difficult for the Dutch batters. The 29-year old’s pace and nagging line have been likened to Tim Murtagh, and today he lived up to that billing with four of his wickets coming from edges caught behind the wicket, and two LBWs. His series with the ball ended with 9 wickets at 10.89 runs apiece – an excellent return from the Northern Knights and Carrickfergus seamer, as he puts his case forward for an international recall. Equally impressive was White. His three wickets came at an economical rate, and he demonstrated a confidence to vary his line and pace. Two of his scalps coming from edges to Porterfield low at first slip, and one was a mistimed drive to long off.

The Netherlands A total of 105 was never going to be enough, and despite the Wolves losing five wickets, the home side looked comfortable enough in the run chase.

Captain Harry Tector notched his second half-century of the series with a 57* from 50 balls, which featured nine fours and a ramp shot for six. Fittingly it was Shane Getkate batting at the other end, as Tector smashed three fours and that six off the last four balls of the match, with the Wolves finishing on 110-5 from 20.4 overs.

The series result will be pleasing for Wolves head coach Pete Johnston and Ireland Men’s head coach Graham Ford ahead of the approaching World Cup Super League series in Holland between the Netherlands and Ireland senior sides in three weeks. Indeed, for both sides, this series may well have confirmed selections in the minds of the senior head coaches.