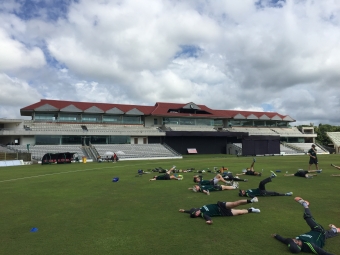 The Ireland Wolves match against Bangladesh A was abandoned on Tuesday after heavy rain and lightning interrupted play in what was an intriguing opener to the 5-match series.

Skipper for the day John Anderson won the toss and chose to bat first but that decision looked to have backfired early on when the Wolves found themselves 14/4 inside 5 overs. A little bit of damp left over helping the seamers a little more than expected early on.

“It was a great honour to lead the team,” Anderson said. “It was obviously not an ideal start, but we showed what quality is in the squad.”

Subashis Roy and Abu Haydar took two wickets each. First up they dismissed openers Jack Tector (4) and James Shannon (6). Then, skipper Anderson and centurion from the 4-day match Simi Singh went for nought as Lorcan Tucker joined Sean Terry in the middle.

They then played a blinder putting on 83 for the fifth wicket. Tucker made 27, with Terry making a brilliant 65.

“Sean and Lorcan started the recovery by playing positively and taking the game on,” Anderson said after the game.

Barry McCarthy then put practice into play as he scored an excellent 39 in 32 balls, Shane Getkate hit a valuable 23 and Andy McBrine continued to impress with the bat as he anchored the innings with the tail, making a vital 37 to help guide the Wolves towards a defendable score.

Mulder (12) and Chase (10*) finished off the innings, batting to the last over and bringing the score to 229 – a great effort considering we were 14-4 early doors.

In reply Bangladesh A reached 75-3 off 4 overs when rain and lightning intervened in what was developing into a fascinating encounter. Barry McCarthy took two wickets and Jacob Mulder the other as the Wolves looked to defend 229. McCarthy’s first needed an interesting catch by Tucker, before an LBW decision & Chase had the safe hands to hold on to a skyer for the third.

That was to be last moment of note before the match was abandoned 14 overs into the Bangladesh A reply.

“The game was evenly poised when the rain came. Having taken 3 quick wickets the guys were fired and it was disappointing for the match to be cut short,” added Anderson.

The sides meet again on Thursday October 19th in the 2nd of the 5 match one-day series at 9am local time (4am Irish time) and Anderson is looking forward to that already.

“We’ve shown glimpses of what we can do on the tour so far, and the guys are looking forward to clicking as a team in the remaining games.”