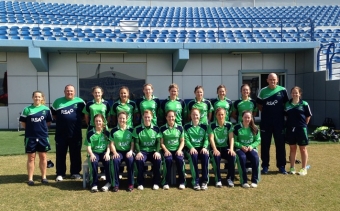 TRENT JOHNSTON believes the Ireland Women’s squad announced today for the ICC World Twenty20 finals in Bangladesh can emulate the stirring deeds of their male counterparts and make a big statement on the global stage.

The 39-year-old became Head Coach of the women’s team following his retirement from international cricket in December, and has already seen his young charges beat Pakistan in a Twenty20 encounter in Qatar last month.

Such is the competition and commitment in the women’s game, Johnston says picking the final 14 for next month’s finals in Bangladesh was an incredibly tough challenge.

“For me there are striking similarities to 2007, when we were preparing for the World Cup in the West Indies,” said Johnston, who skippered Ireland to wins in that tournament against Pakistan and Bangladesh.

“The players are all amateurs and making a lot of sacrifices. We’re doing a lot of weekend and early morning/night work at the indoor centres and outdoors too at YMCA. The girls were doing running sessions in the snow on Tuesday night, so there’s no shortage of commitment there.

“They’ve worked incredibly hard this past few months and you get the feeling that this could be the start of something really big and exciting in women’s cricket in Ireland. You just don’t know where success could take the game.

“We went to the World Cup in the West Indies in 2007 and two years later following our success there, we had players on professional contracts for the first time. Now in 2014, there are 24 guys contracted to Cricket Ireland. Who knows where a few more wins over Full Members, and at World Cups, will take this women’s squad.” Johnston is enjoying his transition from player to coach - with his young proteges proving willing students - but he has found some elements of his new role to be a real challenge.

“Without a shadow of a doubt, picking a squad to go to a 20-over World Cup, and then have to tell the players who’ve missed out is one of the hardest things I’ve ever had to do,” he said.

“I suppose like most squads, 10 names picked themselves, but there was a lot of agonising over those last four places. I then spoke with the whole squad of 30 because I felt it was important for me to let them know personally, and explain why they hadn’t made the final cut. There’s an open and honest environment now amongst the women’s squad and I want to encourage that.

“We’re introducing new elements into the squad, looking to take the players out of their comfort zone. We want them to be brave, positive, and show real intensity with their cricket. That comes with confidence, and that’s what the coaching staff will be looking to instill in the weeks ahead.”

There are two changes to the squad which travelled to Qatar, with the inclusion of all-rounders Eimear Richardson and Kim Garth, who come in for batter Rebecca Rolfe and opening bowler Amy Kenealy. Kim Garth returns to the squad after missing the trip to Qatar.

Richardson has been playing cricket in New Zealand over the winter, while 17 year-old Garth, daughter of two former Irish internationals, is currently studying for her Leaving Certificate.

Continuing the family theme, the squad includes twins Isobel, who captains the side, and Cecelia Joyce, who together with elder brother Ed, will become only the fifth trio of siblings to take part in ICC global finals.

“The squad announcement marks the final run in to the World Cup,” said Isobel Joyce. “Every player has put in a huge amount of work and commitment in the preparation.The strength of the wider squad has made competition for spots very tough which can only be a good thing for the team.

“Training is more competitive and with nobody’s place safe the work rate from all the squad has been impressive. Our work-load has intensified week on week since we returned from Qatar with most players training either on their fitness or cricket every day of the week, sometimes twice a day.

“The final weeks in the run up to departure will no doubt be just as tough but we’re enjoying the challenge and looking for every one percent of improvement we can to prepare more fully for Bangladesh. We can’t wait for the action to begin, and we all believe there are exciting times ahead for the squad and Irish cricket.”

Former England World Cup winning coach Mark Lane has been involved in preparing the squad and will assist Johnston in Bangladesh.

“Laney has a fantastic track record as a coach, and has an encyclopaedic knowledge of the women’s game which has been invaluable to me in the short time he’s been around the team,” Johnston said.

“We’ve really hit it off and we make a great team. I bounce a lot of things off Mark, and we’re very similar in our thought processes, and our ethos in the type of cricket we want Ireland to play.”