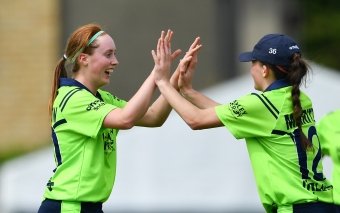 Sophie MacMahon played a significant role in the field

ARBROATH, Scotland - Ireland Women’s cricket team has kicked off its quest to qualify for next year’s ICC Women’s T20 World Cup with a 9-wicket victory over Namibia in Scotland today.

In difficult blustery conditions, captain Laura Delany won the toss and sent the African side in first.

Good line and length bowling from the seamers, backed up by some sharp fielding, restricted the Namibians to 83-9 from their 20 overs.

Eimear Richardson’s 2-10 from four overs was the most eye-catching individual bowling return, but with five separate bowlers claiming wickets and the fielding unit effecting three run outs, the Irish side can feel satisfied in the all-round team performance in the field. 22-year old Sophie MacMahon, playing only her 8th T20I, will feel especially pleased having taken a wicket, a catch and had a hand in all three run outs. In addition, Leah Paul claimed her first international wicket during the innings.

And @SophieMacMahon is in the action in a big way. First, this run out to make it 71-6 in the 15th. Then she follows up with a catch. Namibia now 73-7. #BackingGreen  pic.twitter.com/xbT53FjL1p

Seeking 84 runs for victory, after the early loss of Orla Prendergast (2) may have early jitters in many sides, but the experience and confidence of Gaby Lewis (26), Kim Garth (22*) and Mary Waldron (33) guided Ireland to a comfortable win by seven wickets, with 34 balls to spare.

Mary Waldron was named Player of the Match. After the match she was asked about conditions, and joked:

“Yes, even being Irish, those conditions today were pretty horrific. The girls did amazingly well and the ground staff got the plaudits there – they did a great job to keep us out there for almost 40 overs in the end, but it was tough going.”

Asked about her performance with the bat:

The Irish side next takes on the Netherlands tomorrow at 2pm, with the Dutch side having lost their opener today to Thailand.