Ireland Women chase 9th in the World against hosts 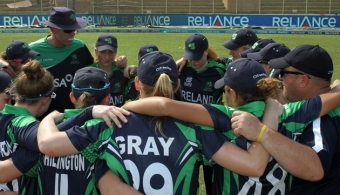 Ireland Women are the only side without a win in the group stages of the ICC Women’s World Twenty20 but in many ways they have drawn one of the glamour ties of the competition as they play the hosts Bangladesh in the 9th/10th Place Play-Off.

One of the highlights of the ICC Women’s World Twenty20 2014 has been the response it has received from the locals in Sylhet. Game after game, good crowds have turned up at the Sylhet Divisional Stadium to cheer players. While the focus of the tournament has shifted to Mirpur for the knockouts, the ninth place playoff between Bangladesh Women and Ireland Women, will in all probability, also attract a good crowd on Thursday (April 3).

On paper, Bangladesh starts as favourite, having beaten Sri Lanka Women by three runs in its last game on Wednesday. The home team has had a patchy performance, but its highlight was the win against Sri Lanka. In that game, Rumana Ahmed’s 41 helped Bangladesh post its highest ever total in Twenty20 Internationals before Panna Ghosh picked up three wickets, including that of Shashikala Siriwardene, the Sri Lanka captain, in the final over, to give a crowd in excess of 8000 its first moment of celebration. Bangladesh’s biggest worry has been its batting. Except for Rumana and Salma Khatun, the captain, no one else has aggregated more than 50 runs in the tournament. The bowling has been comparatively better, with Salma, Khadija Tul Kubra, Rumana and Panna being among the wickets.

To finish the World T20 on a winning note, Bangladesh will have to depend on its form players for a final hurrah.

At the other end is Ireland, a team that earned the right to play in the competition after a decision was taken in the ICC annual conference in June 2013 to allow the runner-up and the winner of the third place playoff of the qualifiers to go through. While the team has not yet notched up a victory, Isobel Joyce, Clare Shillington, Cecelia Joyce, Elena Tice and Eimear Richardson have all been good in patches. Ireland will fancy its chances of ending the tournament with a victory against Bangladesh, so that the side can fly back home with smiles. But like Bangladesh, Ireland will need its best players to rise in unison.