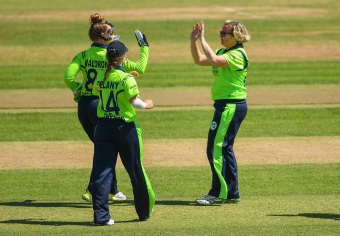 The Ireland Women’s cricket team have completed a comprehensive victory of Uganda today and ensured they remain top of Group B, booking themselves a semi-finals berth, in Amstelveen today.

After grey skies and drizzle delayed the start of play, Ireland Captain Laura Delany won the toss for the third consecutive match and again chose to make first use of the ball.

From the outset the Ugandans struggled to deal with accurate, miserly bowling of the Irish bowling unit. Wickets fell at regular intervals, with the chief protagonist being leg-spinner Ciara Metcalfe who claimed a remarkable 3-8 off four overs, including one maiden. Metcalfe’s first wicket of the day was also her 100th wicket for Ireland.

Clare Shillington showed that batting isn’t her only talent by claiming two catches in the field, including a close-in reflex catch at short cover (see video here).

Uganda never threatened to break out, pinned down by good bowling, and finished on 78-8 from their 20 overs.

Requiring 79 for victory, the Irish side set about the run-chase with attacking flair. Clare Shillington, twice Player of the Match in the last two matches, once again top scored with 27 from 21 balls (three fours). She has now scored 112 runs in three innings at a strike rate of 121.7, and has been excellent at laying solid platforms for the Irish run chases in all three matches.

Ciara Metcalfe was named Player of the Match for her bowling effort which included an incredible 20 dot balls from her four overs.

Asked after the game how she felt looking for that elusive 100th wicket, Ciara said:

“At the start of my career we were only playing about three games a summer, but the games have upped over recent years, so it’s taken a long time to get to 100 wickets. But it’s a really special occasion, and it eases us into the semi-finals of this tournament.”

“It [the game] went well today. With regards to the 100th wicket I felt it was never going to come and I had to just concentrate on doing my best with the ball. You get caught up, it’s like someone on 99, you get caught up in that moment instead of doing what you need to do. But the wicket was good for me, I got some turn and I got some wickets - so it worked out well.”

“[In terms of the tournament itself] It’s what we’re working towards, it’s what we’ve come here to do. We’re taking each game one at a time, now we’re in the semi-final ready and we’re prepared.”

While there have been several stand-out individual performances, Head Coach Aaron Hamilton can be satisfied that all three Group Stage wins have been team efforts. With the batting, Ireland have only lost six wickets during three successful run chases, and with the bowling, no opponent has scored 100 or more against the Irish attack.

Ireland’s victory ensures they finish top of Group B and will be joined by Scotland who completed a tight win over Thailand in the other Group B match today. The semi-final will be on Thursday with Ireland’s opposition to be decided this afternoon after the final two Group A matches are completed.