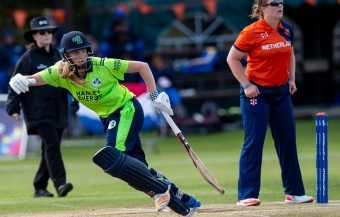 DUNDEE, Scotland - Ireland Women’s cricket team has booked their place in the semi-finals of the ICC Women’s T20 World Cup Qualifier with a 19-run win over the Netherlands – the last Group Stage match against Thailand will now decide the top team in the Group and the probable easier route to World Cup qualification.

Conditions overhead were much improved from yesterday, however the pitch played much slower. Winning the toss for the second successive game, Ireland captain Laura Delany chose to bat first.

Good early bowling from the Dutch side saw Ireland lose early wickets and looking precarious at 31-3 in the 7th over. With the Irish side needing a partnership to settle the nerves, Delany and vice-captain Kim Garth put on a stabilising 53-run partnership. Garth’s 39 from 35 balls played the more assertive role, while Delany (28 from 31 balls) turned the strike over regularly and ensured her team would post a defendable total.

A late 18 from 13 balls from Eimear Richardson boosted the final total to 120-6 from their allocated 20 overs.

With 121 runs for victory, the Netherlands came out looking confident, led by 20-year old opener Sterre Kalis who hit six boundaries in her 46 from 58 balls. Her partnership with Miranda Veringmeier (28) threatened to mount a serious challenge for victory, but Richardson’s excellent ball to remove Kalis with the score on 83 left the Dutch with 38 to win from 26 balls. Delany then took charge and bowled a tight late spell, claiming two wickets and restricting the scoring, ensuring the run rate required become insurmountable for the Dutch side. They finished 101-5 from their 20 overs, falling 19 runs short of the Irish total.

Delany was named Player of the Match for her all-round performance.

“Today was a tough game against the Netherlands, so I am delighted for us to come out on top and secure another win. I thought our middle order performed well, and we considered 120 on that wicket was a good score in the end. Our bowlers kept it simple and bowled to our plans, Sterre [Kalis] batted well but once we removed her there was too much work left to do for our opponents. We are all delighted to get the result and qualify for the semis.”

The Irish side next takes on Thailand on Tuesday at 10am, the winner of that encounter will finish top of the Group and likely avoid a semi-final against Bangladesh. Ireland will require an outright victory in the match due to an inferior net run rate to Thailand.

RESULT: Two wickets to @lauradel14 in the final over. Netherlands finish on 101-5.

We’re in the semis with the next game against Thailand to decide who tops the Group.#BackingGreen