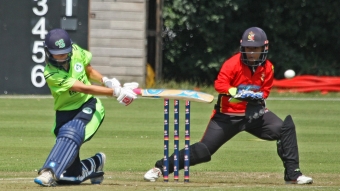 The Ireland Women’s cricket team have booked themselves a place in the ICC Women’s World T20 tournament in November with a nervy, but ultimately comfortable win over Papua New Guinea in Amstelveen today.

The Irish innings got off the worst possible start with tournament top run-scorer Clare Shillington cutting a short, wide ball straight to backward point to be dismissed for a second ball duck.

Things could have been much worse soon after with the Papua New Guinea side putting down three separate chances in the next two overs, but Cecelia Joyce and Gaby Lewis rode their luck and pushed Ireland back on the road to recovery. However with the score on 47, Joyce (18 from 25 balls; three fours) was dismissed.

While other batters struggled to dominate the bowling Lewis looked assured and batted positively from the outset. Her 36 from 33 balls included five boundaries, and was only dismissed by a chance run out while backing up at the non-strikers end a little too far.

While a few middle order wickets slowed the run rate and Ireland looked as though they may be kept under 100, a solid 21* from captain Laura Delany - supported by Isobel Joyce, Kim Garth and Shauna Kavanagh who each scored 10 runs apiece – saw Ireland close on 113-6 off 20 overs.

With 114 the target for Papua New Guinea, good early bowling by Isobel Joyce (1-14 off 3 overs) and Eimear Richardson (2-22 off 4 overs) had their opposition at 7-2 in the fourth over.

From there the batters never looked able to cope with the tight line-and-length bowling from each of the Irish bowlers - it took until the 11th over until the first boundary was struck. Skipper Delany chimed in with 2-15 from four overs, while speedster Lucy O’Reilly cleaned up the tail and finished with 3-13 from 3.2 overs.

O’Reilly was named Player of the Match for her bowling effort, although this match stood as a true team effort – firstly to for the batters to dig themselves out of an early nervy situation, then the bowlers to totally dominate their opponents.

Head Coach Aaron Hamilton will not only be pleased with the win and World T20 qualification, but will be pleased with the manner of the wins and progression of the season. Considering the confidence-sapping series against the New Zealand White Ferns back in early June, the squad has picked themselves up and turned around their season, finishing in sublime fashion.

Ireland’s victory puts them into the Final of the Qualifiers on Saturday, but also guarantees qualification for the World T20 tournament. The second qualification spot is being fought out between Scotland and Bangladesh this afternoon.

Player of the Match, Ireland’s Lucy O’Reilly said: “I was happy with my bowling performance, but I am very happy we have qualified to be honest, there is always going to be nerves with pressure on to make sure you get to the West Indies so it is a relief.  We are excited and definitely want to win the tournament, and then we can prepare for the World T20.”