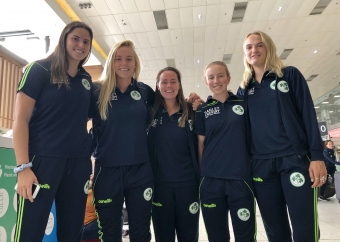 Speaking at Dublin Airport, Delany was upbeat about the challenge ahead:

“It’s always exciting playing in these tournaments with the prospect of what lies ahead should we qualify. I think it will be a tough test for us as a squad but we can’t wait to get started.”

“At the moment our focus is getting out of the group stage, we’ve had a couple of tough games against Thailand but I am hopeful we will put that right come match day.”

“Should we qualify, there’s nothing more exciting for a cricketer than playing in a World Cup. It’s the biggest tournament players can play in whilst representing their country, playing against the best sides in the world - doesn’t get much better than that.

Asked about the rise in profile of the women’s game, she said:

“Livestreaming of a number of our matches is a brilliant addition to the Qualifier this year. The more exposure of the women’s game the more it will continue to grow and develop. We’re quite fortunate that we always have family and friends support and follow our progress on Twitter whilst away, however with some of the games being streamed they will be able to follow ball by ball!”

Our team is heading off this morning to Scotland for the @ICC Women’s T20 World Cup Qualifier. Good luck all! #BackingGreen  pic.twitter.com/vmySgB0EF3