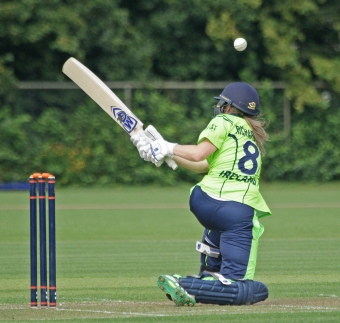 Ireland Women fell just short of chasing down their target of 54 in their rain affected Quadrangular Series game against Thailand. In a game that was reduced to ten overs a side, Ireland just lost out by four runs in a tight and pulsating finish.

The start was delayed in the Netherlands due to heavy rain, which initially had reduced the game to 14 overs a side. However, after Ireland won the toss and elected to field, they were off again after just four deliveries. The bowlers run-ups were deemed too wet to keep playing and after a slip from Orla Prendergast, the players left the field. They returned half an hour later, and the game was reduced to ten overs a side.

The Irish bowling throughout the innings was tight, with not many loose balls being offered up by the bowlers. They took a few early wickets also, with Eimear Richardson striking before Shauna Kavanagh’s direct hit left Thailand 20-2 at the halfway stage. Lara Maritz got in on the action with a wicket of her own, but the Thailand batters did well late on, being able to strike at a run a ball in the final couple of overs. They lost their fourth wicket off the last ball of the innings, trying to push late runs and ending up with a comfortable run-out for Gaby Lewis from deep square-leg. Thailand had scored 54-4 from their 10 overs, which was a competitive score.

The run chase for Ireland never gained any momentum from the start, mostly down to some very canny bowling from Thailand, who were never far away with their accurate lines and lengths. They got the prize wicket of Lewis early on, before Prendergast fell to leave the side 9-2. Eimear Richardson and Shauna Kavanagh looked to rebuild but Richardson fell when trying to push the score along again, with them being 21-3. Ireland were falling behind the rate at this stage, and they lost Kavanagh for 12 and Rebecca Stokell soon after chasing quick runs.

The tight bowling restricted Ireland to needing 18 runs from the final over of their run chase. Despite a spirited effort from the side in the final over, which including scoring two boundaries, Ireland fell four runs short of their target of 55.

Ireland will be action again tomorrow against Scotland at the same start time of 3.30 PM local time, 2.30 PM Irish Time.

Link to the scorecard here.