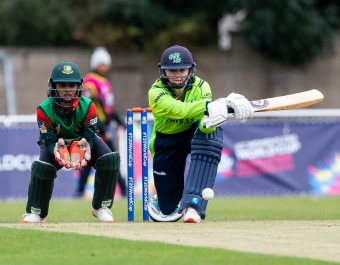 Ireland Women fought back bravely but in the end they were overcome by a tough, experienced opponent

DUNDEE, Scotland - Ireland Women’s cricket team has bowed out of the ICC Women’s T20 World Cup Qualifier at the semi-final stage after being defeated by Bangladesh by four wickets today.

The match, whilst technically a semi-final, was indeed a ‘final’ for both sides, as the winner would qualify for next year’s T20 World Cup.

For the fourth straight game, captain Laura Delany won the toss, and today she chose to bat first.

The conditions were cool, overcast and offered swing to the early Bangladeshi bowlers, and they exploited those condition well. Three early wickets set Ireland back on their heels, with Gaby Lewis (5), Mary Waldron (1) and Kim Garth (2) back in the pavilion with just 14 runs on the board.

SCORE UPDATE: Challenging conditions and Ireland has lost a couple of further wickets. We are 43-4 in the 13th over.

Needing a stabilising innings, and to give her team something to build around, captain Delany settled in and worked the ball around. Her innings of 25 off 39 balls was essential in providing her side any chance of mounting a defendable total, only falling late on trying to up the scoring tempo.

Orla Prendergast (10 from 10 balls) showed a brief glimpse of counter-attacking play, but the 30-run sixth-wicket stand between Delany and Eimear Richardson (25 from 17 balls) gave Ireland a much-needed boost in the latter overs. Richardson’s batting in this tournament has been of an exceptionally high standard - coming in late at seven she has registered scores of 18*, 21 and 25 all at a strike rate of 130, adding valuable runs at the back end of each innings.

While the Irish side made it to the final over, the tail succumbed and they were bowled out for 85.

With a target around 20-25 runs below par, Ireland’s bowlers were after early wickets, and following a 21-run opening stand the initial breakthrough by Kim Garth induced a mini-collapse, with Ireland claiming 4-9 in 21 balls. It was Orla Prendergast (2-11) and Sophie MacMahon (1-9) who did most the top order damage and for the first time in the game the Bangladeshi side looked vulnerable. The fourth wicket, of Fargana Hoque Pinky was possibly the most memorable wicket of the day with wicket-keeper Mary Waldron moving to her right with the line of the ball then diving high to claim a brilliant dismissal.

What a catch this was from Mary Waldron! #T20WorldCup pic.twitter.com/EKAEkF6dPh

In the end, the target proved too small to defend, and a late 32 from 37 balls from Sanjida Islam saw Bangladesh home with 9 balls to spare.

Bangladesh Women head into the Qualifier Final in the knowledge that they will be heading to Australia in 2020 for the T20 World Cup. Ireland will return home disappointed with failing to qualify, but after reflection should be encouraged that some of the performances - particularly from some of the newer squad members - may point to the potential of a brighter future.