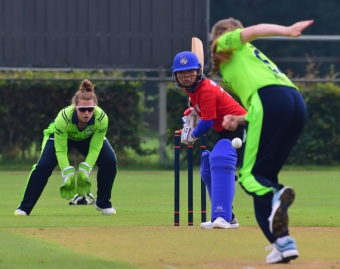 DEVENTER, Holland - The Ireland Women’s cricket team has been defeated by Thailand for the second time in a week - both in rain-reduced encounters.

After winning the toss, Ireland batted first in conditions that had been heavily affected by overnight rains. Scoring was going to be at a premium, and the Irish side’s effort was not helped by the early loss of yesterday’s batting hero Gaby Lewis. Lewis had set the match ablaze in yesterday’s encounter with Netherlands hitting 71, but today she missed a slower, full-pitched ball and was bowled for 2.

Rebecca Stokell (16) and Kim Garth (17) looked to get the innings back on track pushing the score to 36-1 in the seventh over, but the loss of both batters in the space of two overs saw Ireland teetering on 44-3 in the ninth over.

Mary Waldron (21) and captain Laura Delany (22) made headway in trying to score at a run a ball, but the loss of Waldron with the score on 77 saw Ireland lose five wickets for 10 runs, and by the time rain intervened in the 17th over, Ireland was 87-8. The downpour brought the Irish innings to a premature close, and a readjusted DLS target of 64 was set for Thailand from 11 overs.

Despite tight bowling by Celeste Raack (0-9 from 3 overs) and two wickets to Sophie MacMahon (2-13), the Thai side looked in control of the run chase and eventually passed the target with a six, winning the match with four balls to spare.

The Irish side will go into tomorrow’s last T20I of the series against Scotland knowing that they will need an improved performance with the bat will be needed to defeat the Wildcats, who comfortably beat the in-form Thailand yesterday.