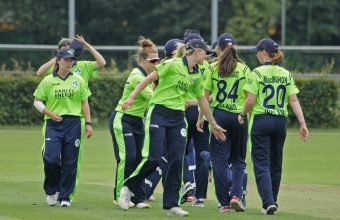 Ireland Women will play the Netherlands on Monday

Ireland Women fell to their second close defeat in two days, by losing out to Scotland Women by 11 runs in a tight game at Salland Cricket Club in the Netherlands.

Having lost the toss, Ireland were in the field first, but started their effort with the ball in fine style. It was once again Eimear Richardson causing early problems for the Scottish batters, she struck to remove Sarah Bryce in just the second over. Lara Maritz soon followed up with the wicket of Becky Glen right at the conclusion of the powerplay, with the 6 over stint ending at 24-2.

Scotland began to rebuild in the middle section of the innings and did so successfully, however the bowling was still very tight from the Ireland bowlers. Maritz came back to strike again to dismiss Chatterji, while Richardson was brought back and immediately struck to dismiss Scholes and Wilson in the same over, with the score creeping up towards 100. Thanks to Lorna Jack’s 32, Scotland did manage to get over the 100 mark, finishing with 105-6 from their 20 overs.

The Ireland chase didn’t start too well as Leah Paul was adjudged to be LBW early on. However, Gaby Lewis and Kim Garth, steadied the ship and gave the Irish a good start, bringing the score up to 30-1 in the process. But Lewis fell to a great piece of fielding to be dismissed run out, and that was a big turning point in the game. Garth was joined by Una Raymond-Hoey and they continued to push the score along, but scoring was becoming tougher and the run rate was beginning to climb to above a run a ball.

The pressure told on Garth, who having scored a very good 30, fell trying to push the score along. Laura Delany joined Raymond-Hoey, but through some excellent Scottish bowling, they were falling behind the run rate. It went down to needing 28 from the last two overs, but the runs were very hard to come by on a wearing pitch. Four wickets falling in the final two overs as running and shot selection was trying to secure a victory for Ireland, but it wasn’t to be. Ireland finishing up on 94-7, losing out by 11 runs.

Tomorrow the team will have a rest day before returning to action on Monday against the Netherlands, action starting at 3.30 PM local time, 2.30 PM Irish time.