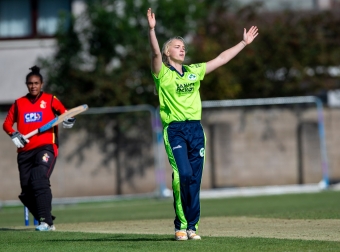 In sunny conditions, captain Laura Delany won the toss for the fifth consecutive game in a row, and chose to bowl first on what looked a slow pitch.

Great line and length bowling from the Kim Garth (2-17) and Eimear Richardson (3-9), backed up by good catching, ensured early wickets and a sluggish run rate by the batting side.

17-year old Orla Prendergast again impressed with the ball (1-16), and Ireland will be pleased that only one of the PNG batters made double figures. Full credit goes to Konio Oala (35 from 31 balls) who kept her side in the game.

Needing 86 for the win, Ireland’s openers came out firing. Gaby Lewis (10 from 8 balls) showed a brief glimpse of her best before falling to a juggled catch in the covers, but Rebecca Stokell (26*) and Kim Garth (29) put on a 50-run partnership in 43 balls to take their side to within touching distance of victory. Garth fell just short of completing the task, but Prendergast joined Stokell and the pair finished off the 21 runs required for victory.

Ireland won the match by a resounding eight wickets, and Kim Garth received Player of the Match.

The Qualifier final will be played later today between Bangladesh and Thailand.