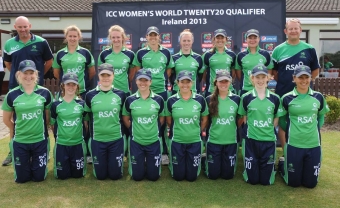 The growing stature of Ireland’s women cricketers has been handed a massive boost with an invitation to take part in a presitigious tri-series with South Africa and Pakistan which the PCB is hosting in Qatar.

The three nations will play both 50-overs and T20 international series in what should be ideal preparation for the Irish camp ahead of their first ICC World T20 finals appearance in Bangladesh in March.

For captain Isobel Joyce, the series provides a welcome relief from the Irish winter. “After months of indoor training, bowling machines and the inside of a gym, the players are looking forward to getting back outdoors and playing some cricket,” she said.

The 30-year-old all-rounder is under no illusion though about the difficulty of the task that awaits an Irish squad - which includes her twin Cecilia - against two Full Member nations.

“It will be tough going from stepping off the plane in Qatar to playing back to back matches against South Africa and Pakistan, but it seems like the perfect way to start 2014 - in at the deep end!” she said.

The Irish have been putting in hours of training to raise their fitness levels for the challenge of playing in the heat of Bangladesh, and Joyce is hoping their efforts will reap dividends.

“We’ve never had such a busy off season with the squad working hard to get into good shape so hopefully that will pay off in Qatar,” she said.

“With one or two players unavailable due to work or school, this tour will be a good opportunity to see what some other players can do ahead of the T20 World Cup and try to figure out the best combinations for that tournament.” Clare Shillington is one of two Malahide players in the squad.

There are five Merrion representatives in the squad, with the uncapped Kate McKenna earning a call-up alonside the Joyce twins, Melissa Scott-Hayward and teenage leg-spinner Elena Tice.

YMCA provide three members of the travelling party, with Jennifer Gray another player who has yet to feature on the international stage, although she has played in the ECB County Championships.

She is joined by Claremont Road team mates Emma Flanagan and Lucy O’Reilly, who at 13 became the second youngest player in international cricket history during the summer.

Ireland’s most capped player Clare Shillington is one of two Malahide representatives, along with wicket-keeper Mary Waldron. Leinster have three players in the line-up, with all-rounder Laura Delany, pace bowler Amy Kenealy, and batter Rebecca Rolfe. The squad is completed by opening bowler Louise McCarthy from Pembroke.

Ireland play ODI’s against South Africa on January 10 and 15, and Pakistan on January 11 and 13 - the final is scheduled for Friday January 17.

The teams then switch to T20 mode, with Ireland facing Pakistan on the 19th and South Africa the following day. They then face both in a double-header on the 22nd, before the tour concludes with the final on Friday 24th.