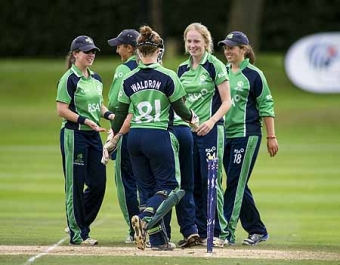 Ireland’s women cricketers will look to cap a successful season when they play South Africa in a three game International T20 Series next week in England.

It will be Johnston’s last games with the side, as he departs for a new position with New South Wales Cricket following the series.

“It’s sad to be leaving but I’m proud of what the players have achieved in my time at the helm,” said Johnston. “The group have really improved as cricketers and taken responsibility for their game. The trophies are a bonus but for me the real prize has been seeing the team grow and mature into a real cohesive unit.

“The future of Irish women’s cricket is bright - you only have to look at the fact we have four teenagers in the current squad who are all contributing. The pleasing aspect for me is the depth we have now. It used to be that we were really dependent on a couple of main performers, but now everyone is putting their hands up scoring runs and taking wickets.

“South Africa will be a tough challenge for the players, but it’s one we’ll relish and I’m certain it’ll be three very competitive games for the teams.” Isobel Joyce captains the Ireland side

Ireland are at full strength for the matches with Isobel Joyce captaining the side, which includes her sister Cecelia, and Merrion team mates Kate McKenna and Elena Tice.

In-form opening bowler Louise McCarthy is one of three Pembroke players, along with Shauna Kavanagh and Kim Garth.

The matches are all being played at Moseley Cricket Club, with two games on Tuesday September 9th (11am and 3:30pm), with the third match the following day at 1pm.