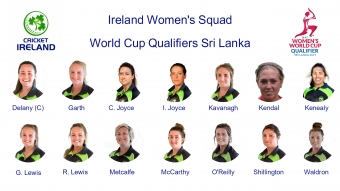 The Leinster all-rounder is part of an experienced 14-player squad which has been drawn in Group A of the ten-team competition alongside India, Thailand, Zimbabwe and Sri Lanka.

The top three from each group goes forward to a Super Six phase, from which the top four qualify for the finals in England next June.

Delany who has won 87 caps at just 23 years-old accepts the challenge will be difficult, but it’s one the squad is relishing.

“After a busy summer the squad have been working very hard with Adam Sullivan and Aaron Hamilton back home,” said Delany. “As a squad we have really progressed over the last 12-18 months and are hoping to carry this momentum through to 2017.

“Some of the squad have been based in the Southern Hemisphere and I have no doubt they will take with them the skills they have learned into the qualifiers.

“This is a very exciting tournament and a brilliant opportunity for Irish women’s cricket. No one is clearer than this group of players that our aim is to qualify for the World Cup in England next June.”

For Ireland Women Head Coach Aaron Hamilton the tournament will provide a stern examination of the squad, but he’s confident their preparation will stand them in good stead for the challenges ahead.

“This will be a big test for us but I’m confident in the preparation we’ve had over the last season leading into Sri Lanka,” said Hamilton.

“I’m excited by the squad’s efforts and results over last summer, where we had some encouraging performances throughout both the South Africa and Bangladesh series.

Ireland beat South Africa in both a T20I and an ODI for the first time, while they also levelled with Bangladesh in a drawn series in Ireland.

“The Dublin based players have prepared well throughout the last three months and there are six players from the squad playing in Australia at present which will provide them with confidence and valuable game time,” added Hamilton.

“There will be a training camp at La Manga Club in early January, and that will form a key part in our preparation. This will allow the Dublin based players to get quality outdoor training time before we go to Dubai where the whole squad will meet for a pre-tournament camp.”

Ireland will play a warm-up game against Bangladesh on February 5th, before opening their campaign against Zimbabwe on the 7th. They then take on hosts Sri Lanka on the 8th, and India on the 10th. Their final group game sees them take on Thailand on the 11th.