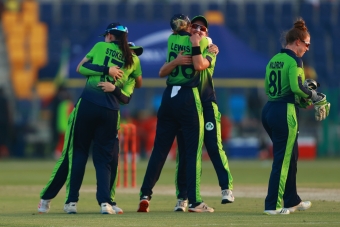 Celebrations after the match

In a true all-round team performance, Ireland’s top six batters registered double-figures, while the bowlers remained composed under mounting pressure - with stand-out bowlers Jane Maguire and Arlene Kelly taking four crucial wickets between them - as Ed Joyce’s team held on to claim one of the two T20 World Cup spots on offer.

Having been sent in the bat, Ireland started off with positive intent - Gaby Lewis slapping the second ball of the day to the deep square leg boundary. Along with her opening partner Amy Hunter, the pair punished any short deliveries as they looked to take the early initiative. However, Lewis (11) fell in the fourth over after she top-edged one to backward point, with Ireland 25-1.

Orla Prendergast entered the fray and looked in fine touch once again - striking two fours and a six from her first nine balls, as Ireland moved on to 44-1 after the powerplay

Following a 31-run stand, Hunter (19) advanced down Audrey Mazvishaya but was stumped in 9th over. Prendergast tried to take advantage of a second life after being dropped earlier in her innings and powered her way to 28 before holing out at cover off the bowling of Kelis Ndlovu.

Stokell’s late cameo saw her smash 20 runs off the 18th over, as 37 runs flowed from the final three overs – Ireland finished on 137-6 from their 20 overs.

Jane Maguire claimed two early wickets in the Zimbabwean run-chase – Ndlovu (8) and Chipo Tiripano (4) – but began to recover with Sharne Mayers and Mary-Anne Musonda posting a 50-run partnership. That partnership was broken by Kelly in the 13th over when she clipped the off stump of Mayers (39), and Zimbabwe were 71-3.

Zimbabwe upped the scoring rate in the latter overs – needing a feasible 39 from 30 balls, Cara Murray struck, removing Musonda (31) with a flighted delivery that spun away from the right-hander leaving her stranded, and Mary Waldron duly completed the stumping.

Delany took the ball for the final over with 15 runs required by the batting side, but despite finding a boundary with the second ball, Ireland held on for the win.

Ireland will progress to the Qualifier Final on Sunday against the winner between Bangladesh and Thailand but have already secured qualification to next year’s T20 World Cup through today’s victory.