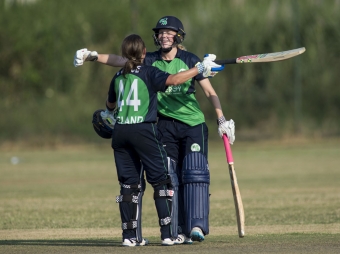 Ireland Women swept past celtic rivals Scotland on Thursday morning to secure a place in Saturday’s T20 World Cup Qualifier final against Bangladesh, but more importantly a berth in next year’s final tournament in India.

Isobel Joyce’s side can now look forward to mixing it with the world’s best in the sub-continent, however the Ireland captain is sure to have nothing more than Saturday’s decider on her mind after another superb performance here.

Despite boasting a strong batting line-up there is little doubt that much of Ireland’s success in this tournament has been built on their time in the field. The bowlers have been outstanding thus far and it was to be the same against the Scots in an emphatic 9-wicket win.

Joyce used six bowlers including herself in the pivotal semi-final and all of them were on the mark in a powerful display.

Scotland started reasonably well, if a little steadily, with Fi Urquhart (21) and Rachel Scholes putting on 24 in nearly 7 overs for the 1st wicket.

Once Laura Delany (1-14) trapped Scholes lbw for 8 however, Ireland pounced. Liz Priddle (11) was the only batter to offer any resistance after that as the bowlers assumed complete control.

Player-of-the-match Lucy O’Reilly really impressed again with her 3-16 but this was hunting in packs at its best. The 16 year-old - daughter of former Irish international Peter - showed great guile and variation from one so youthful.

A confident Irish reply saw Claire Shillington and Cecilia Joyce race to 58 before the former fell for an excellent 34.

It was to be the only blip of the innings however as Ireland knocked off the target at their ease.Joyce continued her run of form with the bat, finishing unbeaten on 36 when the winning line was reached with Garth (5*) keeping her company.

It was another really impressive performance from a side that has sustained their level since landing in the Thai capital. The level of professionalism from a well drilled outfit has ensured their deserved success.

Saturday’s tussle with Bangladesh is likely to provide the sternest test of all this week, but on this form Ireland will be confident of lifting the trophy.