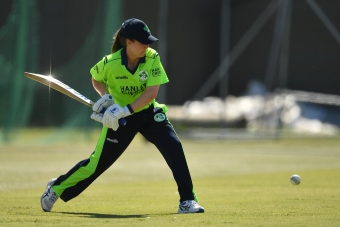 Ireland Women’s Head Coach and Captain have declared lessons have been learned from the White Ferns series and the squad is fighting fit and ready to take on the next challenge of Bangladesh – who recently won the Asia Cup tournament by beating India in the final.

“As a squad we have really had to put the recent series against New Zealand in context. The matches were a valuable learning exercise for our young squad. While we have some players with a great depth of experience, there are a large proportion of players still finding their feet in the international game,” said Aaron Hamilton, Head Coach of the Ireland Women’s team.

“We were aware that, going into the series against the world’s third-best side, our frontline bowling attack was still very raw. Were they thrown in at the deep end? Yes, they probably were but what makes me proud is the resilience they displayed throughout, and the way they have come away as a unit, determined to learn lessons and grow from the experience.”

“We now face a different challenge in Bangladesh, but we face them with a full complement of players. Isobel Joyce, who sustained an injury during the T20 International at YMCA has been passed fit. We are still working with Kim Garth on returning her slowly to full fitness, so Kim will feature in a batting capacity only, if called upon.”

Speaking recently as part of an interview in the forthcoming match programme, Captain Laura Delany reflected on where the side was at:

“As a squad we sat down and agreed that the New Zealand series was part of a much bigger plan for us,” she explained.

“You always want to play against the best sides in the world and to have three or four games was very valuable for us. New Zealand was a tough series but we have had time to reflect on it and we are ready to go again. Regardless of the outcomes we still had some positives to take away and I was very pleased with Gaby Lewis who batted incredibly well in the T20 format. Bangladesh whilst only ranked one position higher than us will be a tough series too. They have put in some big wins against some of the best sides over the last few weeks but having beaten them on several occasions before it’s a series we feel quite confident going in to.”

“The next few months are defining for this team – a Bangladesh series and then we will head off to the Netherlands for the Women’s World T20 Qualifier tournament. Once we play the way we can, I’m confident we shall give ourselves every chance of qualifying [for the World Cup].”

Asked about the double-header on Friday with the men’s team, Delany said:

“We’re all very excited about the prospect of playing ahead of the men in Malahide on Friday. For us it is a chance to go out and express ourselves and carry on the attacking style of cricket we want to play. Hopefully we’ll have a good crowd in to see what we can do. The next few games provide us with an opportunity to prove what this Irish side is capable of.

“Over the last 12 months we have adopted a more attacking style of batting and we have a blend of big hitters, strike rotators and players that can play three sixty. I’m incredibly excited for where this team can go over the next eight months.”

“If we can play the way we know we can, this is going to be the time we’ll change Irish women’s cricket – and the prospect of captaining that team is something I still have to pinch myself about.