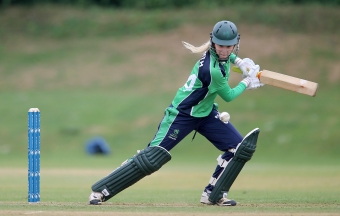 Kim Garth comes into the Ireland side for the ECB T20

The Ireland Women’s side for the first round of the ECB T20 Division Two tournament next week has been named.

Ireland are in Group B and travel to Lancashire where they will play two games against the hosts, and two against Durham.

Ireland have already played both sides this season in the ECB County Championships, losing out to Lancashire by 6 wickets, before bouncing back to record a 6 run win over Durham the following day.

Mary Waldron captains the Girls in Green, who play two games on Tuesday and two on Wednesday. Before that, Ireland travel to Axminster to take on Devon in the ECB County Championship.