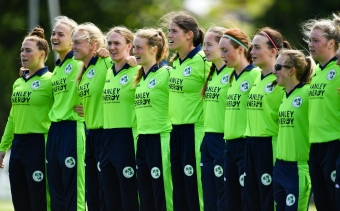 The new fixtures will be played 16-18 July

DUBLIN – Cricket Ireland has today announced new fixtures for the Ireland Women’s cricket team, with the squad set to take on the England Women’s Academy side in three T20 matches from 16 to 18 July 2019, as part of its preparations for the ICC Women’s T20 World Cup Global Qualifier in August.

Interim Head Coach Ed Joyce’s side will play three T20 fixtures that have been organised as part of a replacement programme of matches following the cancellation of the Zimbabwe Women’s tour last week.

“Cricket Ireland has been working hard behind-the-scenes in recent days to pull together a replacement programme of matches for the senior squad since the Zimbabwe series was cancelled. We had two hard-fought encounters with Leinster Under-16s Boys last Friday, and now look forward to these three new fixtures against what is a quality side.”

“The squad has been training well, but nothing beats time in the middle in a match situation. It’s incredibly important in the build-up to the Qualifier that we play in match conditions and use the opportunity to experiment with players, and player roles within the squad.”

“We would like to thank the ECB and the England Women’s Academy for responding so positively to our approach and finding availability to arrange these fixtures at short notice.”