Ireland Women lose twice in a day despite Tice heroics 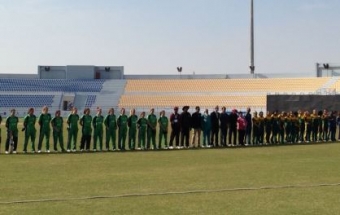 Ireland Women suffered back-to-back defeats against South Africa and Pakistan in their latest games in the PCB Qatar International tri-series.

Lizelle Lee scored a Player-of-the match half century to lead South Africa to 119 for 2 in the first game. She shared an opening stand of 61 with Trisha Chetty (23) which meant Ireland were always on the back foot.

Following the loss of Lee for 50 from 63 balls (2 sixes, 2 fours), Marizanne Kapp (19*) and Mignon du Preez (18*) ensured a late burst adding 31 in the final three overs. Laura Delany, who along with Louise McCarthy was winning her 50th cap, was the most successful of the Irish bowlers taking 2 for 33.

Ireland’s batters struggled in the face of the accurate South African attack, struggling to 73 for 8 in their allotted overs, with wicket-keeper Mary Waldron top scoring with 13.

In the evening game, Ireland were unable to replicate their heroics of Sunday, as Pakistan gained revenge in their 21 run win.

Nain Abidi top scored with an impressive 56 from 58 balls as Pakistan racked up an imposing 132 for 5. Sana Mir chipped in with a breezy 23 from just 12 balls, as Ireland wilted in the closing overs.

Ireland, missing Cecelia Joyce through injury, battled bravely, but in the end fell just 21 runs short thanks to Elena Tice’s highest international score. She made an unbeaten 44, while Isobel Joyce hit 36 from just 35 balls in a valiant run chase.

Ireland are back in action on Wednesday when they face South Africa in the final group game.