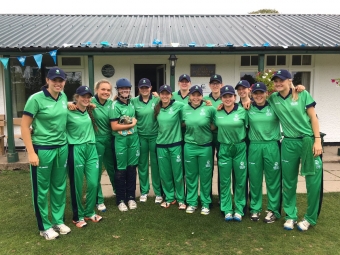 The 2017 Under-19s side featured Gaby Lewis, Cara Murray and Rebecca Stokell who are all with the senior squad at the WT20Qs

Cricket Ireland has named the Under-19 Women’s squad to play four fixtures at Malvern College, Worcestershire next week.

“I am really looking forward to this week of cricket, as it’s a good way for the players to put into practice what they have been working on during the winter, and in club cricket and Super 3s competitions.”

“The selectors have chosen a squad with plenty of experience – players like Leah Paul, Aoife Beggs and Louise Little already have senior international caps. But I’m particularly pleased that most of the others in the squad have been gaining competitive experience at Super 3s level, which underscores the growing importance of that competition.”

“The players are well aware of the potential opportunities that this tour offers – Gaby Lewis, Cara Murray and Rebecca Stokell all represented the Under-19s last year, and all three are now in the current senior side that is competing successfully at the Women’s World T20 Qualifier at present. The Under-19s is the talent pipeline to the national senior team, and this squad shows that we have a lot of positives to look forward to over coming years.”

Ireland Women international Leah Paul will lead the side, with the 13-player squad being: