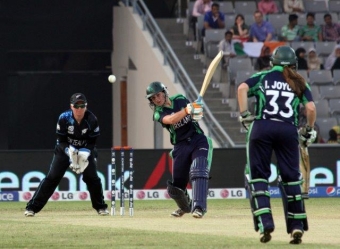 Women’s World T20 defending champion has been well served by spinners, who are likely to test the plucky Irish side too

With little turnaround time between matches in the ICC Women’s World Twenty 2014, most teams rely on a day’s rest to shut the previous game out of their systems and refocus ahead of their next match. But less than 12 hours after its morale-boosting six-wicket win over South Africa Women on Tuesday night, Meg Lanning and her Australian team were back at training ahead of a Group A fixture against Ireland Women at the Sylhet Divisional Stadium on Thursday (March 27).

For a side whose last two global titles came in the subcontinent, the batting at the top of the order for Australia Women has been somewhat fragile. Delissa Kimmince, who is Ellyse Villani’s replacement, didn’t grab her opportunity against South Africa, while Alex Blackwell hasn’t built on two starts. Two different opening combinations in as many games haven’t yielded the desired result, and the pressure to steer the innings has fallen on the lower middle order.

While it was pipped by nine runs against New Zealand, Australia found saviours in Ellyse Perry and Jess Cameron against South Africa, with the duo turning around a potentially tricky chase into a canter.

That the batters have had the luxury of biding their time has been due to the efforts of the spinners. Jess Jonassen and Erin Osborne have worked out a good pace to bowl at, and have ensured the runs have been kept down in the middle overs, making up for the patchy form of the two most promising pacers - Perry and Holly Ferling – who have looked a little undercooked on these tracks.

The presence of Lisa Sthalekar, who joined the team’s support staff on Tuesday as coaching assistant, will have a positive influence on the group. Sthalekar, who retired from international cricket after Australia’s World Cup win last year, was among the best allrounders in the women’s game and will offer a wealth of experience to draw upon.

Ireland was vanquished on its World T20 debut, and while the 42-run margin may suggest otherwise, the team went down fighting against New Zealand Women. An evening that began with promise ended in disappointment, with nerves on the big stage also playing a part for Ireland. To be fair, when a team is faced by the incandescent brilliance of Suzie Bates, one of the top batters in the women’s game, there isn’t much it can do. Such was the ferocity of New Zealand’s start that Ireland looked hesitant on the field. It’s a challenge Ireland overcame at the World T20 qualifiers last year, but it quickly found that it wasn’t the same at the highest level.

If the team has to give itself a chance, the onus will once again be on the batters. Clare Shillington and Isobel Joyce, the captain, approached the chase against New Zealand with a sense of purpose, and as Ireland lost wickets, the batters tried to ensure they at least got as close as possible to the target. Cecelia, Isobel’s twin sister, brought out the innovative streak in her. But for Ireland to compete, it can’t just rely on just one or two individuals. When Isobel spoke about the need to take over from the men’s team who crashed out despite dominating most parts of the group stages, one could gather the sense of pride the side associated itself with. After all, a chance to shine on the big stage has taken quite a while in coming for Isobel, who first started playing at the age of 16 in 2000.

For a small country with a tiny pool, getting this far is an achievement in itself. If it can play well enough to make the defending champion sweat, it will already count as a job well done.