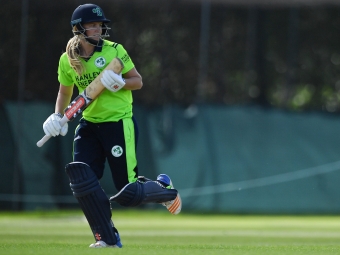 Kim Garth continued her good run of form with the bat

After losing in-form opener Gaby Lewis (1) early, the 17-year old fellow opener Orla Prendergast was joined by Garth and the pair set about getting the innings back on track and settle any early nerves. The 28-run partnership in 25 balls was successful in taking away any thoughts the PNG team had of an upset, and laid the platform that Garth and Mary Waldron built on after Prendergast fell for 18.

Garth and Waldron put on 64 runs in the next 44 balls, with Waldron playing the support role to Garth’s aggressive stand. Garth’s half-century came off 30 balls, and included 7 fours and 1 six, before she and Waldron fell four balls apart. For Garth, her 57 today this was a fitting continuation of the rich vein of batting form she has come into in 2019 that has seen her score 292 runs in her seven innings at an average of 58.40.

Eimear Richardson (18) and captain Delany (18) put on valuable late runs, and the Irish side posted a competitive 147-6 from their 20 overs.

END OF INNINGS: Ireland Women have finished on 147-6 from 20 overs.

Needing 148 for victory, the Papua New Guinean side were off the pace from the outset, and were never allowed to build any momentum by a tight and economical bowling display.

It was Garth (1-3) who struck first, beating opener Naoani Vare (0) with a ball that kept a little low and crashed into the stumps. Soon after, Celeste Raack (1-9) dismissed the other opener Sibona Jimmy (16) and the scoring rate reduced to a trickle, with just 12 runs coming from the next 20 balls.

Two wickets to Richardson (2-13) and single wickets to Delany (1-12), Lara Maritz (1-11) and a run out by Raack ensured the batting side were never a threat, and Papua New Guinea finished 70-runs short at the end of their 20 overs.

After the match, Delany said:

“We are pretty happy, it was quite a convincing win. We knew that when we came off with more than 140 on the board that it was going to be enough. We took a couple of early wickets and PNG were on the back foot from the start. They obviously rely on their top order to do the job and we just get building dots and taking wickets, so I’m really happy how we did today.”